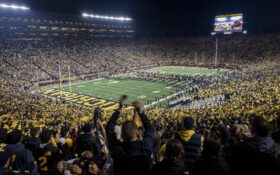 A high school football player designated as a star recruit for colleges by ESPN is accused of trying to kill his ex-girlfriend’s boyfriend.

Luke Hill, 18, faces charges including attempted first-degree murder after allegedly firing gunshots that struck a home in Accokeek, Maryland, on Monday night, according to charging documents obtained by The Washington Post.

Hill, a defensive back who graduated from St. Frances Academy in Baltimore after withdrawing from St. John’s College High during his junior year, had committed to play at the University of Oregon, but Coach Mario Cristobal told The Oregonian that he was cut from their program this spring.

Prince George’s County Police redacted the name of the target, but ESPN reported that it was Ishmael Leggett, Hill’s former classmate at St. John’s. Leggett, a 6-foot-4 guard who has committed to play basketball this fall at the University of Rhode Island, wouldn’t comment to the Post, but his next coach expressed relief that the gunshots missed.

“I am aware of the situation with Ishmael Leggett and have been in contact with him and his family,” University of Rhode Island Basketball Coach David Cox told the Providence Journal. “Thankfully, he was not harmed, as his well-being is my primary concern.”

Responding police officers said the target told them he was playing basketball outside his house when someone inside a white car began shooting at him. The mother of the target told officers she heard gunshots and saw the white car as she was pulling into her driveway.

The target told officers that his girlfriend had gotten threatening calls from Hill about her current relationship, and that Hill was upset about a photo she posted on social media. Investigators questioned Hill and then obtained a search warrant for his house in Temple Hills, Maryland, where they found a handgun matching the caliber of a casing at the shooting scene, charging documents said.