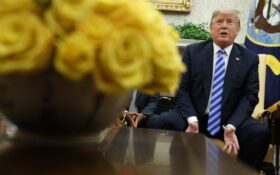 When President Donald Trump approved the police reform executive order, not many people knew there was someone secretly working behind-the-scenes with the White House.

Aa new report has surfaced alleging that the bill had an unlikely helper — and Democrats are absolutely furious.

It was CNN star Van Jones.

The Daily Beast released a scathing report about the longtime CNN contributor — a Democrat who has a notable history of applauding some of Trump’s accomplishments — for helping assist in the development of the executive order with White House aide Jared Kushner.

For Jones, having already praised Trump’s prison reform bill, it was just another day in the office.

“What you got today is, I think, a sign that we are winning,” he told fellow network host Anderson Cooper. “Donald Trump has put himself on record saying we need to reform the police department.”

“We are winning!” he added. “Donald Trump had no plan a month ago to work on this issue at all. The fact that we are now in the direction of moving forward, I think, is good.”

According to the report, Jones and the White House tried to keep their partnership under wraps.

When the executive order was ceremoniously signed by Trump, the liberal media and Democratic lawmakers went on the offensive.

The bill had its fair share of enemies — including House Speaker Nancy Pelosi, Senate Minority Leader Chuck Schumer, Rev. Al Sharpton, and leaders from the NAACP.

Pelosi said it was a “photo-op.”

Sharpton said it wasn’t “worth the paper it was written on.”

However it was, the Democrats didn’t seem to think the bill went far enough … and they were outraged to find out that one of their own actually advised the bill which bans police chokeholds and introduces a national registry of bad cops, among other reforms.

What could’ve been a special bipartisan policy move has been once again dashed in the name of liberalism.