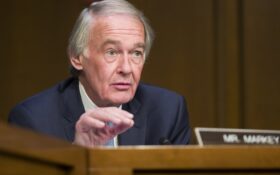 The Democrats’ latest obsession is their dream of packing the Supreme Court with liberal judges.

But liberal lawmakers and their push to cram 13  justices onto the highest court in the land is not off to a hot start. The Horn News reported Thursday about House Speaker Nancy Pelosi’s refusal to even entertain an early Democrat-led court-packing bill.

Now, reports are surfacing that another top Democrat in the party sabotaged the effort… back in 2016.

Sen. Ed Markey, D-Mass., picture from four years ago is haunting him and the Democratic hopes for a Supreme Court remake.

Markey tweeted on Wednesday: “Who agrees that we should expand the Supreme Court?”

Who agrees that we should expand the Supreme Court?

His friends across the aisle quickly reminded him of a photo he might have forgotten about.

Sen. Marsha Blackburn, R-Tenn., posted a picture of Markey from 2016… where he is speaking on behalf of the Democrats’ old #weneednine campaign.

“This you?” Blackburn asked.

The #weneednine campaign was built by Democrats in support of former President Barack Obama’s judge of choice in Merrick Garland in 2016. Democrats had been pushing for Garland’s nomination following the death of Antonin Scalia, which left eight justices for an extended period of time leading up to the election that saw Donald Trump victorious.

At the time, Senate Minority Leader Chuck Schumer and other Democratic leaders all rallied around the push for nine justices.

Now, Democrats like Markey want more spots on the High Court because they didn’t get the candidates they wanted.

But Blackburn wasn’t the only one to call out Markey on his hypocrisy.

I thought we only needed nine? https://t.co/TU8ajiUirn

We thought so,  too.