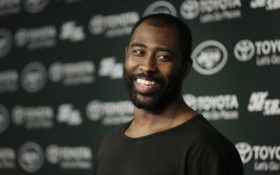 Revis Island is closed for business.

Darrelle Revis, a star cornerback with the New York Jets and a Super Bowl winner with their archrivals, the New England Patriots, has retired.

Revis announced Wednesday on social media that he was ending an 11-season career that included four All-Pro selections.

“Today, I am closing a chapter in my life that I once dreamed of as a kid,” Revis wrote . “The game of football has opened doors for me I once thought were nearly impossible to get through. My passion to play the game at an elite level brought fun and excitement to the term ‘shutdown corner’ which was nearly on the verge of extinction.

“Covering some of the toughest assignments in league history was a challenge every Sunday, but also an honor …

The proprietor of that place was a first-round draft pick (14th overall) by the Jets in 2007 who made an instant impact as a coverage demon. Usually charged with handling an opponent’s top receiver, Revis, now 33, often forced offenses to change their game plan to avoid him.

His skills even allowed Rex Ryan, a renowned defensive coordinator before joining the Jets as head coach, to try new schemes that befuddled the opposition.

“When I had him, obviously Darrelle was in the prime of his career, and there wasn’t anybody close to him,” Ryan said Wednesday. “Maybe Deion (Sanders) in his prime, but that would be the only guy.

“Darrelle could handle anybody. I don’t care if it’s Hall of Fame guys, he locked them down and covered them and it wasn’t even close.”

He had 29 career interceptions, returning three for touchdowns, including a 100-yarder against Miami. In 2009, Revis was beaten out by Charles Woodson for Defensive Player of the Year honors.

“That season, he was far and away the most dominant player in the NFL on defense; that he never got (defensive) MVP that year, people are crazy,” Ryan said. “The impact this guy had, and on the best defense in the league, I thought he should have won that.”

Revis excelled against the best, taking the likes of Terrell Owens and Steve Smith out of the game with his coverage. After a particularly lopsided first-half matchup with Smith, who was with the Panthers, the receiver asked Ryan to “get this guy off me.”

“His confidence and the confidence he had in his own ability, and his preparation, they were phenomenal,” Ryan said about Revis. “Physical as hell, strong, great recovery speed, and he would beat you up on the line of scrimmage.”

He also would beat you at the bargaining table. Revis played his first six years with the Jets, the latter part of that stint filled with contentious contract negotiations.

Revis was dealt to Tampa Bay in 2013 for a first-round and fourth-round draft pick. He was a Buccaneer for one season, then headed to New England as a free agent, winning the championship in his lone year as a Patriot.

He returned to the Jets for two seasons, with injuries slowing Revis in 2016. He made it into five games for Kansas City last season.

Ryan predicted that Revis would be busy in August 2023, when he would be eligible for induction into the Pro Football Hall of Fame.

“He dominated every matchup,” Ryan said. “He was simply the best.”