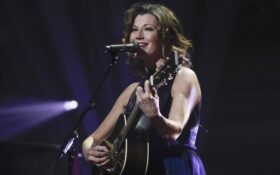 A publicist for Amy Grant says the contemporary Christian singer had open heart surgery on Wednesday to fix a heart condition she has had since birth.

Grant, who has been married to country singer Vince Gill for 20 years, is six-time Grammy winner with well known crossover pop hits like “Baby, Baby,” “Every Heartbeat” and “That’s What Love is For.” She’s sold more than 30 million albums, including her 5-times platinum 1991 record “Heart in Motion,” that introduced her to a larger pop audience.