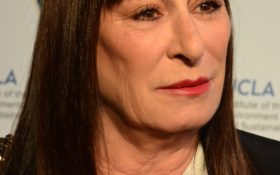 Anjelica Huston isn’t apologizing after making pointed comments about some of her acting contemporaries and past relationships during press tour for “John Wick: Chapter 3 – Parabellum.”

Huston has a key role in the Keanu Reeves action movie, which premiered in Hollywood on Wednesday. She’s been talking about her past while promoting the movie, making pointed jabs about Robert De Niro’s acting choices and a new Diane Keaton movie in the process.

“You know we all live life and at a certain point you have to claim your life. You know, I could apologize for a lot of things. But you know, all in all I’ve tried not to hurt people. Once in a while, I think maybe I’m a little politically incorrect — but that’s part of who I am,” Huston told The Associated Press in an interview.

The 67-year-old actress also commented on her ex Jack Nicholson’s genitalia during an interview earlier in the week. She says she’s happy to keep speaking her mind — but doesn’t want to be seen as a role model for younger actresses.

“Oh God no. I don’t want to be an example to anyone who, you know, who doesn’t know their own mind yet,” she said. “I’ve always known what I liked and what I didn’t like and where I wanted to be. And so far, that served me pretty well.”