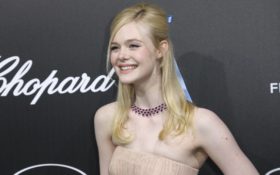 Elle Fanning says she fainted at a Cannes Film Festival dinner because her dress was too tight.

The 21-year-old actress collapsed at the Chopard Trophee dinner Monday evening at Cannes. Fanning later posted a message with a thumbs-up photo on Instagram saying she was “all good” despite what she called a fainting spell from her snug Prada gown.

Fanning is on the jury in Cannes. She’s the youngest person ever to be on the nine-person panel that will decide the Palme d’Or.