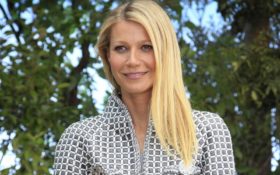 Actress Gwyneth Paltrow has been accused in a new lawsuit Tuesday of breaking a man’s ribs and leaving him with a concussion when she smashed into him from behind while skiing at a Utah ski resort in 2016.

Retired optometrist Terry Sanderson, 72, said during a news conference in Salt Lake City that he heard a “hysterical scream” and was then struck between his shoulder blades on a beginner run at Deer Valley Resort on Feb. 26, 2016. He remembers being thrown forward and losing control of his body before losing consciousness. An acquaintance who witnessed the events said he saw Paltrow hit him squarely in the back.

Paltrow denied the claims through spokeswoman Heather Wilson, who said in an emailed statement: “This lawsuit is without merit and we expect to be vindicated.”

Sanderson claims in the lawsuit that the 46-year-old actress left him injured on the mountain and didn’t send for help. The ski instructor skiing with Paltrow and her family and friends filed a false incident report saying Paltrow didn’t cause the crash, the lawsuit says.

Paltrow is known for her roles in “Shakespeare in Love” and the “Iron Man” movies. She also owns a lifestyle company called goop.

Sanderson said it took him nearly three years to file a lawsuit because he dragged his feet, ran into problems with previous attorneys and was dealing with inability to function properly because of the concussion.

He said he has been in contact with an attorney representing Paltrow, but he has never been offered any compensation or an apology. They have even suggested he could be sued, Sanderson said.

Sanderson’s lawsuit seeks $3.1 million in damages, but he denies he’s suing because Paltrow is a famous and rich celebrity. He called it an unkind gesture not to stick around or ever apologize for what happened.

Attorneys for Sanderson said Paltrow’s attorneys don’t deny she was involved in a crash, but dispute her culpability, said lawyer Robert Sykes, who represents Sanderson.

The office for the attorney representing Paltrow in the case, Stephen Owens of Salt Lake City, declined comment and referred inquiries to Paltrow’s spokeswoman.

Most of the details in the lawsuit are based on the memory of Sanderson’s acquaintance, Craig Ramon, because Sanderson said he doesn’t remember anything beyond being struck in the back and losing control of his body.

In a video played at the news conference, Ramon said a woman hit Sanderson square in the back and the two fell forward together with the actress landing on top of Sanderson.

Sykes claims Paltrow violated the reckless skiing provision of the Summit County code, which requires a skier to stay at the scene of a crash to make sure the other skier is ok.