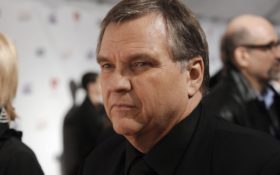 Meat Loaf has filed a lawsuit against a hotel at Dallas-Fort Worth International Airport and organizers of a horror convention held there, blaming them for negligence when he fell from a stage while answering questions from convention goers last May.

The singer and actor, whose real name is Michael Lee Aday, and wife Deborah Lee Gillespie Aday filed the suit Monday in a state district court in Fort Worth, Texas, against the Hyatt Corp. and Texas Frightmare Weekend LLC. The lawsuit alleges the defendants hung curtains at the back edge of the stage at the Hyatt Regency DFW hotel that hid where the stage ended, creating a “hidden hazard.”

The performer incurred severe neck, collarbone and shoulder injuries that have prevented him from performing since, according to the complaint. The 72-year-old Dallas native spent 42 days hospitalized after the fall and required him to undergo physical therapy.

The Hyatt Corp. issued a statement saying that its policy was not to comment on ongoing litigation. The convention organizer did not respond immediately to a message from The Associated Press.

Meat Loaf is best known for his role in the film “The Rocky Horror Picture Show” and his 1977 record album “Bat Out of Hell,” which included the hit title song, as well as “Two Out of Three Ain’t Bad” and “Paradise by the Dashboard Light.”