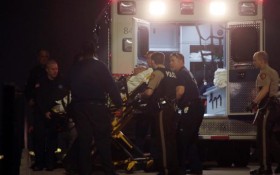 Unrest has taken over St. Louis again following the death of an alleged armed criminal. Sympathetic rioters attacked peacekeepers, apparently demanding police stop using force in any situation, even when their lives are at risk.

The Associated Press reported that officers arrested at least nine people and deployed tear gas amid protests in St. Louis over the death of a black 18-year-old who was fatally shot by police after he pointed a gun at them.

An unruly mob blocked a public intersection, threw glass bottles and bricks at officers of the law, and then refused orders to clear the roadway. A vacant building and at least one car were burned. All to honor Mansur Ball-Bey, who was allegedly getting ready to open fire on the police.

Earlier Wednesday, two police officers serving a search warrant encountered Ball-Bey and another suspect at a home in a crime-troubled section of the city’s north side, St. Louis Police Chief Sam said. The suspects were fleeing the home as Ball-Bey turned and pointed a handgun at the officers, who shot him.

Dotson said four guns, including the handgun wielded by the dead suspect, and crack cocaine were recovered at or near the home, where illegal guns were found during a police search last year.

The law gives police officers latitude to use deadly force when they feel physically endangered. The Supreme Court held in a 1989 case that the appropriateness of use of force by officers “must be judged from the perspective of a reasonable officer on the scene,” rather than evaluated through 20/20 hindsight.

Roughly 150 people gathered Wednesday afternoon near the scene of the shooting, questioning the use of deadly force. Some chanted “Black Lives Matter,” a mantra used after the highly publicized death of Michael Brown in Ferguson, MO last year.

But these mobs and the mainstream media covering this seem to forget that Cops Lives Matter, too.