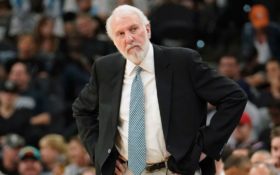 Dedicated fans of the NBA’s San Antonio Spurs are donating their team merchandise and began turning their backs after coach Gregg Popovich became outspoken on his views of the White House.

Popovich has been very clear on his stance towards President Donald Trump — and his opinion is neither informed, nor is it nice.

The star coach has be known to call the president a “coward” and a “pathological liar” who is “unfit intellectually, emotionally, and psychologically.”

This is all coming from a man who’s career is based off telling men wearing tight shorts where to dribble a ball?

In March, Popovich raised the question whether the Second Amendment was “useful” any longer, and said Trump “brings out the dark side of human beings,” according to Fox News.

“I am completely turned off,” Spurs ex-fan Cassandra Casanova told The Washington Post. “After all those years supporting the team, and now I just have no interest. Popovich really messed up.”

Gregg Popovich on the Washington Post story about some Spurs fans being turned off by his political comments pic.twitter.com/dP7uARhxmu

Casanova explained that she is so angry, she donated her dozen of team t-shirts and other merchandise to charity.

“That’s how angry I got. It ruined my basketball life,” she added. “I took it personally. I was such a loyal fan, and he insulted me. Why would you start attacking the people who had been so loyal?”

Another Spurs fan interviewed by The Post stated that he took Popovich’s statements personally.

“I often curse Pop for doing what he did,” said Bob Mulherin. “He insulted more than half of the Spurs’ fan base, and no sign whatsoever of an apology.”

When asked by a reporter about The Post‘s article, Popovich said he did not “care” about what these ex-fans thought. He claims that he has never been told to calm down his outspoken political opinions.

These fans help pay his paycheck, and support his players.

Popovich needs to go back to writing X’s and O’s on his clipboard and stop worrying about the president.