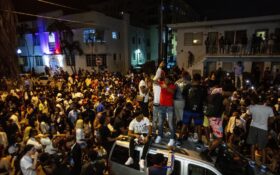 A party-ending curfew imposed after fights, gunfire, property destruction and dangerous stampedes broke out among huge crowds of people in Miami Beach could extend through the end of spring break.

Miami Beach commissioners voted unanimously Sunday to empower the city manager to extend the curfew in the South Beach entertainment district until at least April 12, effectively shutting down a spring break hot spot in one of the few states fully open during the pandemic.

SWAT teams and law enforcement officers from at least four other agencies sought to contain the raucous crowds, but confrontations continued for days before Miami Beach officials enacted the curfew, which forces Ocean Drive restaurants to stop outdoor seating entirely.

City Manager Raul Aguila said many people from other states were coming in “to engage in lawlessness and an ‘anything goes’ party attitude.” He said most weren’t patronizing the businesses that badly need tourism dollars, and instead merely congregating by the thousands in the street.

Miami Beach Police said more than 1,000 people have been arrested this spring break season, with about 80 guns seized. Police Chief Richard Clements said the trouble intensified on Monday, when an unusually large crowd blocked Ocean Drive “and basically had an impromptu street party.” By Thursday, fights were breaking out, setting off dangerous stampedes of people fleeing for safety.

The partying was out of control by Friday night, he said — one restaurant was “turned upside down” in a melee, its “chairs were used as weapons,” and broken glass covered the floor. The iconic Clevelander South Beach bar next door had to suspend all food and beverage operations. Gunshots were fired, and a young woman was hospitalized with a badly cut leg, police said.

“How many more things are we going to allow to occur before we step in?” Clements said during Sunday’s meeting. He defended the city’s curfew, which also closes three causeways leading to South Beach in an effort to keep all but residents and employees from driving onto the island from 8 p.m. to 6 a.m. Thursday through Sunday. “I think this was the right decision,” the chief said.

The crowd was defiant but mostly nonviolent on Saturday night, refusing to submit to the curfew that had only been enacted four hours earlier, when officers in bulletproof vests released pepper spray balls to break up the party. A crowd showed up again Sunday night, defying the curfew yet again.

The situation ignited racial tensions. Some white residents referred to the crowd of predominantly Black tourists as “animals” or “thugs” on social media.

“We have to realize that we are definitely fighting an undertone of racism,” DeAnne Connolly Graham, a member of Miami Beach’s Black Affairs Advisory Committee, told the Miami Herald.

But Miami Beach Mayor Dan Gelber rejected the claim that anyone has been targeted for their race.

“When hundreds of people are running through the streets panicked, you realize that’s not something that a police force can control,” he said during the commission meeting Sunday.

Very few people in the crowds were covering their faces with masks, as is required by a Miami Beach ordinance imposed in hopes of containing the spread of the coronavirus, which has killed more than 33,000 people in Florida so far.

Miami’s tourism arm just spent $5 million on its biggest national advertising campaign in 20 years, seeking a rebound after billions of dollars were lost to the pandemic, canceling last year’s spring break and forcing beach closures across the Sunshine State.

Miami Beach, meanwhile, banned alcohol from the beach, along with all alcohol sales after 10 p.m., and even sent text messages to tourists warning, “Vacation Responsibly or Be Arrested.”

Several commissioners said South Beach needs a new marketing campaign to rebrand its party-city image. They pointed to the handful of arrests in Fort Lauderdale, which has raised its hotel rates and promoted a “family friendly” spring break.

None of it sits well with people who were hoping to finally let loose in the pandemic.

“I just feel like it’s really not fair,” tourist Heather Price told NBC 6. “People paid a lot of money to come all the way out here, just to not be able to do the activities they wanted to.”