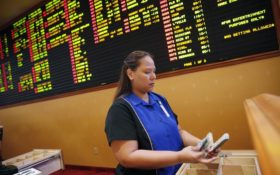 As the push to legalize sports gambling in the U.S. nears a crucial Supreme Court decision, states hoping to reap a financial windfall could face another hurdle: Attracting younger players used to online fantasy sports.

The explosion in popularity of daily fantasy sports over the last decade has created a generation of sports fans more attuned to gauging individual player statistics than how two teams may fare against each other, the challenge at the heart of traditional sports wagering.

Even more important, experts say, is whether states will be able to offer online sports wagering to a demographic raised on smartphones and laptops. That will depend heavily on how the Supreme Court decides New Jersey’s case, expected this spring.

“How motivated are people going to be to get in their car, drive 45 minutes, park, walk through pathways and walkways just to get to a remote corner of a casino?” asked Daniel Wallach, a Florida-based attorney considered an expert in sports gambling law.

New Jersey has challenged the Professional and Amateur Sports Protection Act, the 1992 federal law forbidding all but Nevada and three other states from authorizing gambling on college and professional sports. Only Nevada offers betting on single games.

How the court rules will affect more than two dozen states that are pushing sports betting legislation or considering it if New Jersey is successful.

If it is legalized, one of the challenges for sports betting to succeed will be capturing sports fans like Nick, an experienced daily fantasy player from Maryland who also regularly places traditional sports bets with a bookie through his smartphone or computer.

While illegal, that may still be a more attractive option than traveling to a brick-and-mortar location to place a legal bet.

“Part of the convenience now is that I can place a bet from anywhere,” said the man in his mid-20s, who spoke to The Associated Press on the condition of anonymity because he was talking about doing something illegal. “I probably would stay with what I have right now, with the convenience and accessibility.”

The stakes are huge. Currently, illegal sports wagering is estimated from the tens of billions of dollars annually to as high as $100 billion or more.

A survey commissioned by the Fantasy Sports Trade Association in 2016 estimated more than 57 million people participated in some form of fantasy sports, in which competitors pick rosters of players and win or lose based on how those players perform.

“It almost doesn’t really matter if it’s sports-related or not,” he said. “Whatever the next thing is, they will move to where the money is. It may be cryptocurrency trading.”

“The crossover will be everywhere,” Pearson said. “Players just love action. If they don’t like the (point) spread, maybe they throw down a lineup for the day. Maybe they are on a cold streak and need a change of pace. Options are always good.”

Whether that online action is allowed likely will come down to the specifics of the court’s ruling.

The New Jersey legislation being challenged by the NCAA and professional sports leagues would allow sports gambling at the state’s casinos and horse racing tracks, but doesn’t include online wagering.

If the court strikes down the Professional and Amateur Sports Protection Act as unconstitutional, New Jersey and other states would be free to implement and regulate online and in-person sports gambling.

However, if the court rules more narrowly — leaving PASPA standing but allowing New Jersey to have sports gambling at casinos and racetracks — it could stall online gambling.

Sponsored: Are you afraid you’ll hear this word from your wife?

Online wagering “would likely require a finding that PASPA is unconstitutional,” said Wallach, an attorney with Miami, Florida-based Becker and Poliakoff.

Wallach added that New Jersey might be able to modify its legislation and tie its online sports gambling to existing online casino wagering platforms. The same could apply to other states like West Virginia that already have online gambling contained in their legislation.

“The big money from sports betting will be the online component,” former Democratic New Jersey state Sen. Raymond Lesniak, a driving force behind the state’s effort, said. “But we have to wait to see, if we win the case, how we win it.”