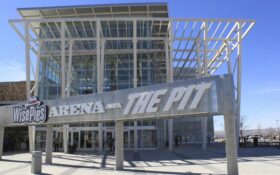 A man who fell from a luxury suite at a university sports arena in Albuquerque onto concrete stairs below has been awarded $144,000 under a state-negotiated settlement, according to settlement documents obtained Monday.

During a Lobos basketball game in December 2016 at the University of New Mexico, Eduardo Bracamonte Jr. of Peralta fell while making his way to a seat, and his momentum carried him over a short wall.

He plunged about 20 feet (6 meters) into the arena’s main seating area and later sued for damages in state district court, alleging that the design and arrangement of the suite were dangerous.

The state paid one-third of the settlement, while contractors on a 2010 stadium renovation paid the remainder. The University of New Mexico and contractors deny any wrongdoing.

University spokesman Daniel Jiron said Monday by email that no modification have been made to the suites, and he highlighted that the settlement was made solely as a business and economic decision.

The lawsuit from Bracamonte says that his son witnessed the fall and was emotionally traumatized. The son received $6,000 under the settlement agreement.

Bracamonte landed feet-first, shattering bones in his foot and ankle.

About 40 luxury suites were added during the 2010 renovation to the university arena known as “The Pit.”

An attorney for Bracamonte could not be reached immediately by phone.