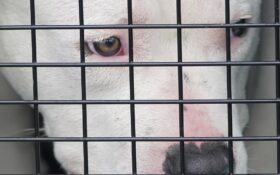 Who will take your pet when you die?

The question often doesn’t have an easy answer, especially for ill or older people headed to residential nursing care or assisted living. During the pandemic, specialized rescue, advocacy and adoption services run by volunteers are trying to fill the void, one pet at a time.

Leaders in the small movement said the past couple of years have opened the eyes of many.

“The thing about COVID is a lot of people are thinking, I can’t be guaranteed to be around forever. A lot more people are trying to make plans in advance, which is the best thing to do because unfortunately, a lot of people wait until they’re in hospice or there’s a desperate situation,” said Amy Shever, founder and director of 2nd Chance 4 Pets in suburban Sacramento, California.

The number of pets surrendered to shelters due to caretaker health or death is up from 7.3% in 2009 to 10.2% during the pandemic, according to the Best Friends Network of thousands of public and private shelters, rescue groups and other animal welfare organizations in all 50 states.

The pets of seniors are often seniors themselves, languishing in shelters or the first to be euthanized after they’re declared unadoptable, Shever said. They’re routinely given up by relatives who can’t take in a dog or cat. The life spans of other pets, such as parrots, are far longer, which sometimes scares off loved ones.

Shever’s focus is educating veterinarians and shelters on how they can get involved. Her organization also tries to help pet owners in need of direction. She urges owners to identify a committed caregiver, provide written instructions for a pet’s routine and put a financial plan in place. Her group has distributed thousands of emergency-card door hangers, for instance, to pet food banks and animal welfare organizations so owners can make their wishes known.

Another organization, Pet Peace of Mind, works directly with about 250 hospices around the country to provide and train volunteers who care for pets of the seriously and terminally ill, said Dianne McGill, the president and founder in Salem, Oregon. Most of the hospices are providing home services, where pets are often giving comfort and support.

“These specialty volunteers bring pet care knowledge with them so they can do whatever is needed to help,” she said. “So they’re walking, feeding, playing, cleaning up or helping to arrange a plan for rehoming.”

While providing pet care or adoption services often isn’t top of mind for social workers or nurses, it’s a huge emotional driving force for patients and loved ones living far away, McGill said.

“Care workers hear about the issues from family members,” she said. “They say, my mom is really, really upset about what’s going to happen to her pet. I live out of state. I can’t help her. How do we get some pet care in place while she’s navigating her end-of-life journey or when she passes?”

“I’ve got a million stories about patients who literally hung on until they heard that their pet had received a new home,” McGill said.

She adopted a 12-year-old Chihuahua named Jackson with the help of Tyson’s Place Animal Rescue in Holland, Michigan. The nonprofit helps people with terminal illnesses find new homes for their pets. Reister, who has been diagnosed with congestive heart failure, had recently lost her own dog and was having a hard time at home alone when she took in Jackson last August.

“I’ve never been without a dog since about 1965,” said the widow. “His previous owner had passed away.”

Soon after, Jackson was also diagnosed with congestive heart failure, and Tyson’s Place stepped in with a grant to help Reister cover his medical bills. She promised to return him to the agency for rehoming should her health take a turn for the worse.

“Having him has really helped me want to continue to live and keep fighting,” said Reister, of Grandville, Michigan. “I started walking one block down and one block back home with him. Now we walk at least 20, 25 minutes a day. He needs to walk and I need to walk. He’s made such a big difference in my life.”

Caitlin Koska, 31, and Michael White, 34, in Ypsilanti, Michigan, included 14-year-old Luna in their May 1 wedding after Koska adopted her through Tyson’s Place around Thanksgiving 2020. Luna, also a Chihuahua, was their ring bearer.

“Her owner had gone into a nursing home and could no longer take care of her,” Koska said. “She has a lot of dental issues, cataracts and very poor hearing. She’s just the sweetest dog. Everybody who knows her loves her.”

Jill Bannik-Brecht founded Tyson’s Place about six years ago. It services the entire state of Michigan, working directly with a pet owner before rehoming becomes an urgent matter, or with family members after a death, using a small network of foster homes.

For Koska, Tyson’s Place took care of extensive dental work for Luna before she was adopted.

“I used to work for a high-kill animal shelter, and I knew what happened to the old dogs when they came in. I remember one dog who animal control literally picked up from the side of his dead owner’s body, and he didn’t even have an opportunity to be adopted. He was put to sleep because we didn’t have space,” Bannik-Brecht said.

“I just can’t meet the demand for this kind of service, especially when it comes to cats,” she said. “In the last two months, I’ve turned away 40 cats that meet our mission just because we don’t have a place to put them.”

Bannik-Brecht knows of just a few other rescues like hers. One, in Canada, also needs help.

Angela Rafuse, 27, in Halifax, Nova Scotia, founded My Grandfather’s Cat on May 18, her grandfather’s birthday. He died in 2019 and left behind his grumpy 14-year-old cat, Mackenzie.

“She was my grandmother’s best friend and when she passed away, my grandfather took care of her for the next year before he passed away,” Rafuse said. “He wouldn’t put his name on the list for a nursing home knowing nobody would take the cat, who has the grumpiest meow I’ve ever heard.”

Rafuse promised her grandfather she would take Mackenzie. She began posting TikTok videos of their adventures. One video, of Mackenzie scratching Rafuse’s face as she held her up to the camera, has been viewed nearly a million times.

“Then so many people started sharing stories with us about how their grandparents’ cats ended up in shelters and how their grandparents worry about what will happen to their cats or their dogs because there’s nowhere to take them,” Rafuse said. “I’ve worked at a nonprofit for the past four years so I thought, it should be pretty easy to find resources to help these people. Nothing existed that empowered a senior and helped them arrange this and empowered their family. Everything was just shelters.”

After she launched, emails asking for help and offering donations rolled in, but she didn’t have enough foster homes to meet demand. She’s working to expand. One of Rafuse’s goals is to help keep a pet at home until the final moment.

As for Mackenzie, she’s living her best life, hiking and kayaking with Rafuse.

“She’s still grumpy,” Rafuse said. “She’s developed a really special connection with my dad, and I know my dad loves that because she’s the last thing he has of his parents.”