Special gin infused with… elephant poo!? (would you drink it?) - The Horn News 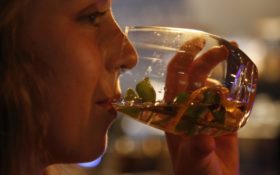 The makers of a South African gin infused with elephant dung swear their use of the animal’s excrement is no gimmick.

The creators of Indlovu Gin, Les and Paula Ansley, stumbled across the idea a year ago after learning that elephants eat a variety of fruits and flowers and yet digest less than a third of it.

“As a consequence, in the elephant dung, you get the most amazing variety of these botanicals,” Les Ansley said during a recent visit to their operations. “Why don’t we let the elephants do the hard work of collecting all these botanicals and we will make gin from it?” he recalled his wife suggesting.

Her idea came after a safari during which a wildlife ranger described an elephant’s digestive process.

Weeks later, he said his wife woke him up in the middle of the night with the inspiration. “OK,” I said sleepily. “Let’s give this a bash. Let’s see how it works out.”

The first batch of elephant dung came by mail from the park where they had taken their safari. Then the couple, both scientists, puzzled for a while before working out the gin-making process.

Now they collect the dung themselves, using their bare hands.

They described the gin’s flavor as “lovely, wooded, almost spicy, earthy” and one that changes subtly with the seasons and location.

The gin bottles are marked with the date and coordinates of where the elephant dung was collected. “So, you’re able to compare almost different vintages of the gin,” Ansley said.

After about five sizeable bags of dung are collected for a batch of 3,000 to 4,000 bottles of the gin, the droppings are dried and crumbled, then washed to remove dirt and sand. Eventually only the remains of the fruits, flowers, leaves and bark eaten by the elephants are left behind.

Those botanicals are then sterilized and dried again and placed in an airing cupboard. Think of it like a “spice cupboard,” Ansley said. Eventually, the remains are infused in the gin.

The couple are not above testing the gin on friends before explaining its provenance. Even with an explanation in advance, they get raised eyebrows.

“The initial reaction of most people is, ‘What? There’s no way.’ But most people are very keen to actually taste it,” Ansley said. And once people hear about elephants’ digestive process “it becomes a lot clearer to them, and they accept it very well.”

They decided to name the gin Indlovu, which means elephant in the Zulu language. The couple did not say how much of the gin they have sold. A bottle sells for around 500 rand, or about $32.

The gin is often a hit with tourists seeking a unique souvenir and a story to tell when they return home, the couple said. With that in mind, the gin is sold in game lodges and duty-free shops in addition to regular online sales.

“I even touched the elephant dung, and being close to the animals are very majestic,” said one South African visitor, Elsabe Hannekom. “So having a piece of them actually feels quite good. An export of the African experience, I would say.”

After a sip, another guest, Jade Badenhorst, weighed in: “Interesting. Very tasty. Very nice. I didn’t expect to be able to drink a gin smoothly.”