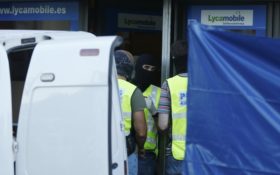 Police in northeastern Spain said Wednesday they found a belt charged with real explosives in a house where a fatal explosion last week derailed the initial plans by an extremist cell to strike with bombs in Barcelona rather than vehicle attacks that eventually killed 14 people. A 15th victim was killed when one of the attackers made his getaway.

Six of the attackers shot dead by police — five on Friday and one Monday — were wearing fake suicide belts.

Chief investigating magistrate Fernando Andreu provisionally jailed two of the four surviving alleged cell members Tuesday after hearing testimony in the National Court in Madrid that the group had been preparing the massive bombs for an imam who planned to blow himself up at a Barcelona monument.

It wasn’t immediately clear if the belt found amid remains of the blast in Alcanar, about 200 kilometers (125 miles) south of Barcelona, was meant to be used by the imam, Abdelbaki Es Satty, who allegedly masterminded the attacks and recruited the others in the cell according to the testimony by the two jailed survivors.

The two —Mohamed Houli Chemlal, 21, and Driss Oukabir, 28— identified Es Satty as the ideological leader of the cell according to a Spanish judicial official who attended the proceeding and briefed journalists but wasn’t authorized by the court to be identified in news reports.

Investigators believe that Houli Chemlal is key to shedding further light on the imam’s role and plans as the only survivor in the blast in Alcanar where Es Satty and another cell member died last Wednesday, the official said.

Houli Chemlal was arrested in a hospital after surviving the blast. He told the court he was alive because he was on the outside porch of the house washing dishes after dinner.

Police had already found at the house more than 100 tanks of butane gas, nails that they planned to use as shrapnel, and 500 liters of acetone, a highly flammable liquid necessary to make TATP, an explosive used by Islamic State group militants.

Investigators were also looking into material found during searches in two northeastern towns, a regional police spokeswoman said. She declined to say what they found in raids late Tuesday at a cybercafe in Ripoll and a house in Vilafranca del Penedes but said the operation was continuing.

Vilafranca is 15 kilometers (nine miles) from where Younes Abouyaaqoub, the suspected driver in the Barcelona attack that killed 13 people, was shot dead Monday by police.

Abouyaaqoub, who fatally stabbed another person while fleeing Thursday, is known to have changed clothes, picked up a bag of knives and a fake explosive belt in the time between the Barcelona attack and his death.

The court interrogations Tuesday exposed more details about how events unfolded during those first hours after the Las Ramblas boulevard carnage on Aug. 17.

Another member of the cell abandoned that afternoon another rented van involved in an accident in a highway near Cambrils, a coastal town south of Barcelona.

According to the police investigation, he regrouped with four other members who bought four knives and an ax in Cambrils three hours before they all were killed by police when they attacked pedestrians in the town’s coastal promenade. One woman died in the attack.

The investigation showed receipts for the knives half burnt in a nearby farmhouse that could have been used as a safe house.

Of the four surviving suspects of the cell, Sahl El Karib worked in the Ripoll cafe. Judge Andreu ordered him to be kept in custody for three more days while police continued probes.

Oukabir, El Karib and other suspect Mohamed Aalla denied being part of the cell during Tuesday’s testimony, said the National Court official who attended proceedings.

Es Satty preached in a mosque Ripoll, which was home to most of the alleged cell members.

ISIS has claimed responsibility for both the Barcelona and Cambrils attacks, which also wounded more than 120.

Oukabir testified he rented the vans used in the attacks, but said he thought they were going to be used for a house move. His brother Moussa was one of the five shot dead in Cambrils.

Aalla said the Audi A3 used in the Cambrils attack was registered under his name but belonged to a sibling. The judge said there was insufficient evidence to jail him and ordered him freed on condition he appear in court weekly, relinquish his passport and not leave Spain.

Police say one of Aalla’s younger brothers died in Cambrils and another one is believed to be the second casualty in the Alcanar house blast.

The judge provisionally charged Houli Chemlal and Oukabir with homicide, injuries of a terrorist nature and belonging to a terrorism organization. Houli Chemlal was also charged with dealing with explosives.

Chemlal was born in Melilla, one of Spain’s two North African coastal enclaves that have borders with Morocco. Spanish media say the other 11 suspects are all reportedly Moroccans who lived in Spain.