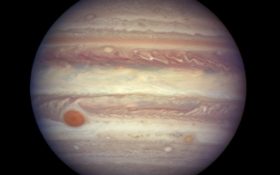 In what sounds like the plot of a summer sci-fi blockbuster, astronomers have detected a sudden and startling change on the planet Jupiter.

Massive plumes are erupting straight from the planet’s most defining feature: the famous “Great Red Spot.”

“I haven’t seen this before in my 17-or-so years of imaging Jupiter,” veteran observer Anthony Wesley of Australia told the Space Weather Archive website.

Some of these massive disturbances – called “streamers,” “flakes” and “blades” – are 6,000 miles across and easily visible on images of the planet. It’s as if the Great Red Spot is being pulled apart – with huge chunks being ripped off and then whipped away by one of the planet’s giant jet streams.

Wesley said he’s been watching these streamers break off with increasing – and almost regular – frequency.

“Each streamer appears to disconnect from the Great Red Spot and dissipate,” Wesley said. “Then, after about a week, a new streamer forms and the process repeats.”

The Great Red Spot has been observed for some two centuries, possibly longer.

Despite those many decades of observation, what scientists KNOW about that massive storm system is dwarfed by what they DON’T.

They’re not even quite sure why the Great Red Spot is red!

But there’s one thing they do know: It’s shrinking.

NASA reported in 2014 that the Great Red Spot is now half the size of what it was at its largest, decades ago.

Scientists have struggled to understand why it’s getting smaller.

One possibility is just the nature of storms. Given the size and scale of the planet, massive storms like these unfold over centuries rather than days, as is the case here on Earth.

So it may be that the storm that is the Great Red Spot – about twice the size of the entire Earth, packing 400-mph winds and ammonia rains – is finally dissipating.

One NASA scientist told Space.com that the Great Red Spot appears to be colliding with a massive vortex system, which could be ripping it apart.

“Some observers implied that these [blades] were induced by the arrival of vortices in a jet just south of the GRS moving from east to west that enters a dark area surrounding it that is characterized by deeper clouds, known as the ‘Red Spot Hollow,'” Glenn Orton told the website.

The British Astronomical Association said the shrink could be playing a role as well: As the Great Red Spot gets smaller, it’s more prone to these disturbances – which means even more of it could break off soon.

And that could spell doom for the famous feature, with some scientists saying it may vanish within our lifetimes.

Want to see it yourself before it’s gone for good?

Jupiter is about to reach its closest point to Earth on June 10-12. It will be four times brighter than Sirius, the brightest star in the sky, and easily visible to the naked eye. Its features — including the Great Red Spot – will be visible with a small telescope.

Look closely, and you may even see some of its moons.

You won’t be alone: There is now a global effort underway to not only track the planet, but to watch the shrinking Great Red Spot for more eruptions.

Amateur astronomers – including backyard sky-watchers – are playing a major role in that process.

“Stay tuned, as the dark region around the [Great Red Spot] is growing in length,” Orton told Space.com. “We’ll see what happens next.”

The world is watching!