Southeastern U.S. at risk for severe weather on Election Day - The Horn News 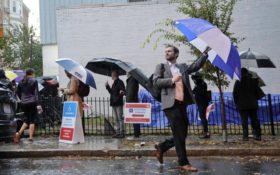 Parts of the southeastern United States are at risk for severe weather including tornadoes early on Election Day, but officials said people should still be able to vote even if storms cause power outages.

The Natchitoches Parish Sheriff’s Office posted on its Twitter feed that multiple tornadoes touched down in the parish. It did not give information about damage or injuries. But NOAA’s Storm Prediction Center reported at least two homes were damaged in the parish due to a possible tornado and high winds.

A storm system moving out of eastern Arkansas late Monday ahead of a cold front will spread across the region during the overnight hours into Tuesday, the Storm Prediction Center said.

In Mississippi, the secretary of state’s office said voting machines have back-up batteries. If the batteries fail, local election officials are ready to move emergency paper ballots, as already happens during occasional machine failures, said Leah Rupp Smith, a spokeswoman for the office.

Brandee Patrick, a spokeswoman for the Louisiana Secretary of State’s Office, described a similar system there.

“It takes quite some time for the batteries in the machines to go out,” Patrick said. “But if all else fails, there will be paper ballots if the machines have no power.”

The Alabama secretary of state’s office is working with emergency management officials and the governor’s office and has a plan for Election Day, said spokesman John Bennett, who refused to release details “to avoid misinforming members of the public.” Several school systems in north Alabama delayed opening on Tuesday as a precaution to allow time for the system to pass.

The threat of severe weather follows storms that were blamed for two deaths in the Gulf Coast area last week. More than 100,000 homes and businesses were left without power by that system, which included at least a dozen tornadoes.