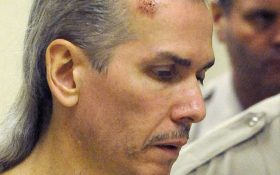 A man who killed a South Dakota prison guard in a failed escape seven years ago is scheduled to be executed Monday after dropping his death penalty appeal.

Rodney Berget, 56, will be put to death for the 2011 slaying of Ronald “R.J.” Johnson, who was beaten with a pipe and had his head covered in plastic wrap at the South Dakota State Penitentiary in Sioux Falls. It will be the state’s first execution since 2012 and just its fourth since reinstating the death penalty in the late 1970s.

Berget admitted to his role in the slaying. He and inmate Eric Robert attacked Johnson on April 12, 2011 — Johnson’s 63rd birthday — in a part of the penitentiary known as Pheasantland Industries, where inmates work on upholstery, signs, furniture and other projects.

After beating Johnson and leaving his body, Robert put on Johnson’s pants, hat and jacket and pushed a cart loaded with two boxes, one with Berget inside, toward the exits. They made it through one gate but were stopped by another guard before they could complete their escape through a second gate.

Berget’s mental status and death penalty eligibility slowed his case. Berget in 2016 appealed his death sentence, but later asked to withdraw the appeal against his lawyers’ advice. Berget wrote to a judge saying he thought the death penalty eventually would be overturned and that he couldn’t imagine spending “another 30 years in a cage doing a life sentence.”

On Friday, Gov. Dennis Daugaard said he had no plans to block the execution. The state Supreme Court rejected one challenge to the state’s method of execution, but a second was pending that argued Berget lacks intellectual capacity to be executed. The U.S. Supreme Court rejected an appeal to overturn Berget’s conviction and death sentence in 2015.

Johnson’s family plans to witness the execution, which is scheduled for 1:30 p.m.

His widow, Lynette Johnson, sized down R.J.’s wedding ring and now wears it next to her own; she keeps his watch — its hands frozen at the time he was attacked — in a clear case next to photos above her fireplace.

“He was so kind,” she told the Argus Leader . “He didn’t have a bad word to say about anybody.”

Johnson said she was nervous about the execution, worried that Berget might try to escape. She said his death may bring a sense of security.

The Department of Corrections has said it plans to use a single drug. Its policy calls for either sodium thiopental or pentobarbital. Pentobarbital was used in its last two executions.

South Dakota has not had issues with obtaining the drugs it needs, as some other states have, perhaps because the state shrouds some details in secrecy. Lawmakers in 2013 approved hiding the identities of its suppliers.

After the execution, witnesses and others will meet with media at a guard training academy that was named for Johnson. It was dedicated one year after his death.

Berget will be the second member of his family to be executed. His older brother, Roger, was executed in Oklahoma in 2000 for killing a man to steal his car.

Dennis Davis, director of South Dakotans for Alternatives to the Death Penalty, said a prayer vigil is planned outside the prison on Monday.

“We think we are better than this and we hope that some day we can get it abolished,” Davis said of the death penalty.