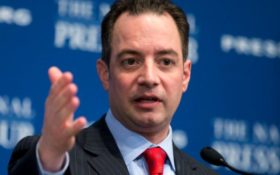 Following the resignation of former Lt. Gen. Michael Flynn on Tuesday, President Donald Trump and conservative lawmakers are desperately hunting the source of the illegal leaks targeting the new administration.

In Washington, D.C. the leak “is raising serious questions — because when the intelligence community captures phone calls of an American inside the U.S., even if the discussion involves a foreign national (in this case an ambassador), steps must be taken to shield the American caller’s identity,” Fox News reported.

Rumors have begun circulating that White House Chief of Staff Reince Priebus is largely to blame.

Trump took to Twitter to sound off about the issue —

The real story here is why are there so many illegal leaks coming out of Washington? Will these leaks be happening as I deal on N.Korea etc?

“If, in fact, the press reports are right, someone made the decision to deliberately listen to General Flynn’s phone calls and that is, I think, unprecedented, unwarranted and flat-out wrong,” House Intelligence Committee Chairman Devin Nunes told Fox News.

According to sources, top White House administrators are citing Priebus’ incompetence for the leaks. Insiders have begun whispering that, following Flynn’s resignation, Priebus could be next out the door.

Breitbart reported Tuesday that “more and more reports of a likely shake-up at the top loom” and that Priebus’ inability to get the White House clear of former President Barack Obama’s loyalists was being blamed by the White House for the leaks.

There’s as many as 50 of these Obama loyalists that are “hiding like sleeper cells everywhere,” one source told Breitbart, which reported that “Priebus has full knowledge of their whereabouts, who they are, and what potential for damage they may cause. He is not doing anything about it, these sources add.”

According to The Associated Press, Trump — who seeks input from a wide range of business associates, friends and colleagues — has been asking people their opinions on Priebus and about possible replacements.

Priebus “was supposed to be this wizard in dealing with congressional Republicans,” one source told Breitbart. “But has not been successful in getting anything serious done.”