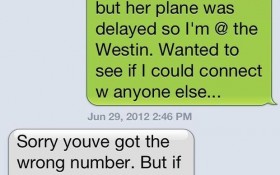 An errant text message led to a special connection. Now, a married St. Louis couple is sharing their unlikely love story about the mistake that forged their relationship.

Kasey Bergh accidentally sent a text to Henry Glendening, a stranger, in June 2012. The pair continued communicating after realizing they had a lot in common, sharing recommendations on books, movies and music, before meeting in person for the first time a week later, the St. Louis Post-Dispatch reported.

Upon their second meeting two days later, they each arrived at a Kirkwood, MO coffee shop at different times and realized they had ordered the same drink.

“From the very, very beginning it felt like we were on the same wavelength,” Glendening said.

Despite a 30-year age difference, Bergh and Glendening’s connection flourished, and they moved in together within two months.

“It really didn’t make any difference,” Glendening said. “We were so connected at that point through deeper stuff.”

He credits Bergh with helping him get out of an “awful place” in his life, which included an unhappy relationship and a dead end job.

“Kasey is a huge inspirer. She wasn’t recommending or advocating any particular direction I go, but she encouraged exploring, finding out what I want to do,” Glendening said.

Bergh believes Glendening caused her to again believe in love and change her mind about remaining single after her divorce six years prior.

“I had totally embraced I was single and that I never needed a guy,” Bergh said. “Then I met Henry.”

Exactly two years after the errant text message, Glendening proposed to Bergh at the rooftop restaurant where they ended their first meeting, with her favorite song, “Thank You” by Led Zeppelin, playing in the background.

The couple married June 27 in front of a graffiti wall near the St. Louis riverfront.