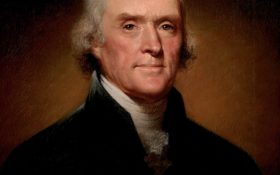 The history of America is a wonderful but complicated thing. Our nation’s founding fathers were brilliant, brave, and thoughtful young men that banded together to reject the tyranny of the United Kingdom. They risked their lives and their fortunes to free America.

But the founding fathers weren’t mythological creatures. They were regular men in extraordinary circumstances — and each of them were extremely complicated.

It’s the kind of nuanced history that is normally saved for institutions of higher learning. But that kind of in-depth thoughtfulness has no place for liberals, it seems. They’re out to make a point — history be damned.

At New York’s Hofstra University, the school’s statue of former President Thomas Jefferson is under attack again. Students are demanding the statue be torn down because Jefferson was a slave owner.

The mob of students joined together Friday for their second annual, “Jefferson Has Gotta Go!” protest. The want the statue torn down, because they claim Jefferson was a racist.

Jefferson is considered to be a radical freethinker in his day, and he devoted much of his political career to stopping the transatlantic slave trade.

“So we just felt, like, in addition to just… Thomas Jefferson being a slave owner and, um, sexual predator… and just, you know, awful, [tearing down his statue] is now an unavoidable thing,” one student told Breitbart. “It just doesn’t have a place, I think, on any college campus… Like, there’s just no reason to… like… immortalize people who brutalize so many of the population.”

“I just don’t think that an institution that, you know, prides itself on diversity and inclusion, and like, offering such a rich liberal arts program can do both,” the student added. “Like, I think you have to choose one or the other… and it seems like Hofstra is perfectly content with choosing Thomas Jefferson over literally everything else.”

Experts have long pointed out that these protests against Jefferson’s legacy are based on a failure to understand American history and our founding fathers.

Like the United States, Jefferson had a complicated history with race and slavery. As a politician and the writer of the Declaration of Independence, Jefferson was against the British-supported Atlantic slave trade — something that is frequently cited in his writings as a reason for America to seek independence — and was behind numerous attempts to end the practice in the United States.

He called African slavery a “hideous blot” on America’s honor. In his writings, Jefferson called slavery a moral depravity that represented the greatest threat to America as a new nation.

“There is nothing I would not sacrifice to a practicable plan of abolishing every vestige of this moral and political depravity,” Jefferson told a friend in 1814.

But it wasn’t all roses. In some of his writings, Jefferson speculated that those of African birth were inferior to those of European birth.

Behind the scenes, he worked towards emancipation of the slaves in America — and at the same time remained fearful that emancipation would destroy America. He said the institution of slavery was like grabbing “a wolf by the ear, and we can neither hold him, nor safely let him go.”

By all accounts, Jefferson was secretly in love with a slave he owned, Sally Hemings, whom he was believed to have quietly married under common law after his first wife died. Hemings gave birth to six of Jefferson’s children, four of whom lived to adulthood. A remarkable historical figure herself, Hemings successfully negotiated “extraordinary privileges” for herself and later emancipation for the couple’s children while she was freed when Jefferson lived in Paris.

Of course, his checkered history with race and slavery is only one part of Jefferson’s story.

Jefferson also wrote the Declaration of Independence and served in the Continental Congress during the American Revolution. He was the third president of the United States, and was critical to the development and survival of American democracy.

He founded the University of Virginia, secured the purchase of the Louisiana Territory and launched the famous Louis and Clark expedition. He even helped a certain liberal French noble, the Marquis de Lafayette, write the first constitution of France during the French Revolution.

That’s because Thomas Jefferson was a remarkable American.

He was also a very complicated man, and was far from perfect. But to dismiss his entire legacy and deface his statues takes an incredibly foolish, short-sighted view of history.

These student protesters should focus on reading a history book, rather than tearing down a statue of a man they don’t understand.