Sorry liberals! How minority voters won it for Trump - The Horn News 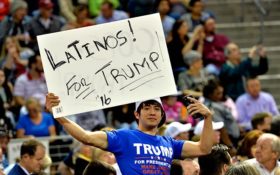 Anyone who thinks white supremacy had anything to do with Trump being elected is wrong.

That’s not my opinion. That’s verifiable fact, backed up with scores of exit data.

Of course, this isn’t something you’ll hear from liberals — it doesn’t fit their shameful narrative about race.

Did Trump say some awful things? Yes, and guess what? White voters responded — Trump’s winning coalition had a smaller proportion of the white vote than Romney or McCain or Bush in either of their elections.

Trump wasn’t elected by white racists — and the math proves it.

The difference in the 2016 presidential election and the 2012 or 2008 election was African-American and Hispanic voters supporting Trump and rejecting Clinton.

The Horn News showed last month that polling data showed Trump was going to win… thanks to increased support among African-American and Hispanic voters.

Trump won the votes of Hispanic and African-Americans in a greater total proportion among any Republican presidential candidate in 20 years.

When you break down the numbers, Trump had less support proportionally among white voters than McCain, Bush in 2000, and Romney did. But his support among African American voters was more than double John McCain’s support in 2008, and nearly twice as large as Mitt Romney’s in 2012.

It wasn’t a huge amount — but in an incredibly tight election, that small swing won him the critical swing states.

For all the mainstream media talks about racism, xenophobia, sexism, and bigotry, the fact is that Obama’s “identity politics” coalition failed for Hillary.

The difference? African-American voters. Trump won a meager 8% of the black vote in Florida – but that was three points higher than Mitt Romney. The difference made up approximately a 0.6% shift in the total vote from one side to the other, a 1.2% total impact.

In other words, if Romney had the support among African-Americans voters that Trump did, he would have won Florida too.

The numbers prove, state after state, that Trump had an unexpected groundswell of support among minority voters. It was the difference maker that gave him the edge. Between Hispanic and African-American support, Clinton lost 3% nationally to Trump when compared to Obama’s numbers. In an election decided by less than 1% of the vote, that’s significant.

So the next time a liberal tells you that Trump is a racist, you can remind them it was minority supporters that elected him.

Obama’s voters didn’t show up like they were told.

When they did, they didn’t vote for Clinton like ordered.

In a tight race, it was enough to put Trump in the White House.