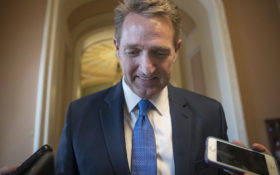 The two women, however, are left-wing activists – and at least one works for multiple organizations funded by globalist billionaire George Soros.

You remember the scene: Kavanaugh tearing up as he told the Senate Judiciary Committee about phony charges that had decimated his family. Senator Lindsey Graham gave a barn-burner of a speech exposing the Democrats’ attempt to crucify the nominee and – looking Flake straight in the eye – shamed anyone who sided with them.

Prior to Kavanaugh’s hearing last Thursday, two women confronted Flake in an elevator up to his office, screaming in his face that he had betrayed all rape victims.

“Look at me when I’m talking to you!” the two women – Ana Maria Archila and Maria Gallagher – yelled in his face. “You are telling me that my assault doesn’t matter!”

It turns out the whole incident was a set-up: Archila leads not one, but two far-left organizations funded by Soros – including a socialist political party.

She serves as executive director of the Center for Popular Democracy, a radical “think tank” so indebted to Soros that his Open Society Foundations is listed as one of its top-three funders.

The elevator speech wasn’t the first time the Soros-funded group tried to interrupt the Kavanaugh confirmation.

“You saw protestors interrupting the Kavanaugh hearings, trying to slow it down and show the Judiciary Committee how much they/we care,” the group bragged in an e-mail to its members. “Those protests were organized by the Women’s March and the Center for Popular Democracy and other groups.”

If one political connection isn’t enough, there’s another even more explosive one.

Archila is on the national committee of a socialist party with a history of voter fraud. The Working Families Party grew out of the activist group ACORN – the liberal group that undercover investigator James O’Keefe exposed for registering people who didn’t exist to vote.

Their massive, multi-state voting fraud operation was bankrolled by U.S. taxpayer dollars… and by Soros.

One of its offshoots in New York state was the Working Families Party, and in fact, the two “separate” groups share the same address.

WFP is so far-left that it thinks Governor Andrew Cuomo – the guy who said “America was never that great” and told conservatives they aren’t welcome in his state – is too conservative.

But WFP doesn’t just want to stack the ballot, it wants to stack the Supreme Court – and to spike President Donald Trump’s conservative nominee.

On Univision, Archila even admitted that she only opposed Kavanaugh because of his views, not allegations of sexual harassment.

“I truly had my hope placed in Senator Flake,” she said – so when Flake announced he would vote for Kavanaugh, she and Gallagher grabbed CNN’s Suzanne Malveaux and set off to ambush him.

The two forced the senator to hang his head — and they changed his mind.

He voted to send Kavanaugh’s nomination to the full Senate – but only if the FBI started a “one-week” investigation into the uncorroborated charges of sexual assault… which is what his Senate Judiciary Committee was supposed to do.

When a reporter asked if the screaming activists swayed him, Flake said, “No, no.”

But that’s not the message left-wing activists are getting. An editor with the Soros-funded publication ThinkProgress tweeted:

Tell me again why we shouldn't confront Republicans where they eat, where they sleep, and where they work until they stop being complicit in the destruction of our democracy. https://t.co/YEft6pmc7o

Expect a lot more harassment from Soros-funded protesters – like the ones at the Kavanaugh hearings and the ones who screamed at Senator Ted Cruz, Secretary of Homeland Security Kirstjen Nielsen, White House Press Secretary Sarah Sanders, and now Flake – in the future.

Thanks a lot, Flake.