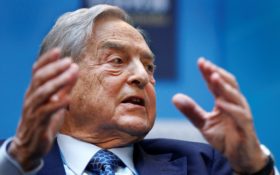 It just might be the biggest collusion scandal in the history of the entire planet… and it’s NOT the one the left-wing media is obsessing over!

George Soros, the shadowy billionaire with close ties to Hillary Clinton and the Democrats, is being accused of funding leftist plots, not just here in the United States but around the world.

And now, one nation has had enough.

Hungary is attempting to unmask Soros over what it calls a global “mafia-like network” – and if they succeed in exposing his activities, it could have a major impact on politics right here in the United States.

It could even reveal the extent to which he’s alleged to have been secretly bankrolling violent protests against President Donald Trump!

Soros, one of the richest men in the world with a fortune of more than $25 billion, was born in Hungary but lives here in the U.S., where he has dual citizenship.

Hungary’s location puts it on the front lines of the immigration crisis, with hundreds of thousands of migrants flooding the nation as they attempt to push into Europe.

While many are seeking a better life, some are trying to force their values on the rest of the world… and as the bloody attacks across the continent have shown, some are willing to commit mass murder to advance their agenda.

Yet despite the violence throughout Europe, Soros has been accused of secretly funding efforts to bring MORE poorly screened migrants into the continent.

Hungary has had enough, and wants to force Soros to reveal his involvement in these activities.

The nation is pushing a law that would unmask the figures behind non-governmental organizations so voters can see who’s REALLY running those networks.

“In Hungarian public life there is a single important element which is not transparent: Soros’s mafia-style network and its agent organizations,” Zoltan Kovacs, a spokesman for Hungarian Prime Minister Viktor Orban, told The Daily Caller News Foundation. “This is why the government insisted that [the] parliament decide on making these organizations transparent, as the Hungarian people have the right to know who represents what and for what purpose.”

Soros claims the government’s attacks on him are anti-Semitic. While Soros is Jewish, however, he has actively worked against many Jewish causes including Israel itself.

The Israeli government even called Soros out over it this week, saying he “continuously undermines Israel’s democratically elected governments.”

The statement cited by Reuters said Soros funds organizations “that defame the Jewish state and seek to deny it the right to defend itself.”

Once again, however, Soros often hides his involvement in those groups – his “mafia-like network” – but Hungary’s move could pull back the curtain.

And that could ultimately tie him to similar organizations and movements here in the United States, where he has been accused of secretly funding agitators and anarchists at anti-Trump rallies.

The New York Times reported that Soros and his Open Society Foundation had financial ties to no less than 56 groups involved in the anti-Trump protests that took place the weekend of the inauguration.

The foundation claims that reports it funded the protests are false… but the statement was so carefully written that they also didn’t deny giving cash to groups involved in the protests.

And that’s only the beginning.

The New American reports money from Soros-linked groups has been linked to the violence in Berkeley earlier this year.

Money from those same pockets go directly to left-wing candidates, with Soros sending $25 million to Clinton and other Democrats in the 2016 election… and that number is just a drop in the puddle.

Politico reports that Soros has given $13 BILLION… with a B… to his various leftist causes over the past three decades.

But it could all come to light soon, and it could be thanks to one small nation fed up with the meddling.