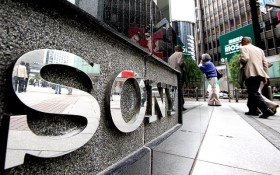 It’s been a long road, but Sony Corp. returned to profit last quarter in a sign its marathon restructuring effort is beginning to produce results.

The Tokyo-based electronics and entertainment conglomerate on Thursday reported a 33.6 billion yen ($278 million) profit for the fiscal second quarter, compared with a loss of 136 billion a year earlier. Sales dropped 0.5 percent to 1.89 trillion yen ($15.6 billion).

Sony’s Xperia mobile phone business was still struggling in a market dominated by Apple Inc.’s iPhone and Samsung’s Galaxy phones. But Sony did well in devices, including image sensors and other semiconductors, in addition to games, home audio equipment and cameras.

It stuck to its annual forecast of a 140 billion yen ($1.2 billion) profit, a reversal from a 126 billion yen loss the previous year.

Sony’s film division did not do as well for the quarter compared with last year, because of a lack of hit movies and the absence of home entertainment revenue from “The Amazing Spider-Man 2,” which had come the previous year.

Sony, once a symbol of Japan’s electronics prowess, by introducing the idea of music-on-the-move with its Walkman, has been in deep trouble. It has been trying to reshape its business to focus on profitable operations and selling some assets, such as its Vaio personal computer business and its stake in Japanese game maker Square Enix.

Sony officials acknowledged they had repeatedly given optimistic promises they had not been able to keep. Sony’s fall from grace has been bemoaned for years as a sign Japan Inc. may have lost its edge for creative innovation.

Sony’s TV business, which took a hit by being late with shifting to flat panel sets, lost money for a decade. It is recently faring better after being turned into a wholly owned subsidiary. Sony is banking on high-end so-called 4K TVs that have superb image quality. Rivals are also working on 4K TVs.

Image sensors, which are used in smartphones, digital cameras, medical devices and self-parking cars, to translate the information in an image into digital signals, is one area where Sony has a lead.

On Wednesday, Sony said it was in talks with Japanese rival Toshiba Corp. to acquire some of Toshiba’s semiconductor manufacturing plants, equipment and related assets in southwestern Japan, which will allow Sony to beef up production of image sensors.

Sony said it would also take over Toshiba’s 1,100 employees in those operations, including designers, production workers and engineers.