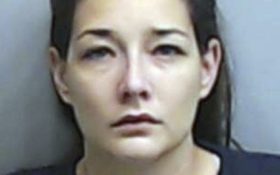 A Georgia wedding planner came in handy for one couple who nearly had more than $2,000 stolen from their reception.

News outlets report Kristina Dardo was arrested Saturday after planner Ashley Baber noticed her among the wedding guests, “holding a jacket in an odd manner,” and thought it a particularly odd garment for the 90-degree weather.

Baber was on high alert. Event planners in the Atlanta area were circulating a surveillance photo of an uninvited guest suspected in similar thefts.

An off-duty officer confronted the wedding crasher, who acknowledged hiding around $2,300 in cash and gift cards under the jacket.

Dardo was sent to the Fulton County jail on a felony theft charge. Police are still determining if she’s behind the other thefts. It’s unclear whether she has a lawyer.