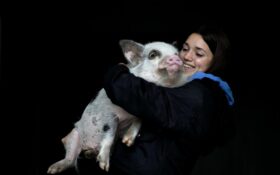 Millions of people have found solace during the pandemic in cuddling a dog or cat. For a few, comfort comes in other forms — those of a horse or a pig, perhaps a possum-like sugar glider or even a tarantula.

In its place, her parents gave her a pig.

Chanchi turned out to be a loyal and loving companion — racing to her side when she fainted.

“One day my legs gave way and he came running. He grabbed my hair and raised my head,” she said. She had been taking online classes at home, unable to see friends or schoolmates. “I didn’t feel well. I was dizzy because I couldn’t leave.”

Without Chanchi, “I wouldn’t be me,” said Benetti, who often sleeps alongside the 20-kilo (45-pound) Juliana pig that greets her with a squeal of delight when she arrives at her house.

Even less common is the case of Lorena Álvarez, whose Buenos Aires apartment is also home to 28 pocket-sized marsupials commonly known as sugar gliders.

“They create pure love for me,” she said. “Do you know what it is to lay down … and they smother you with kisses?”

Álvarez, who teaches statistics at a university — online these days — lives otherwise alone, but said the pets have helped her feel like she has company — sometimes popping up atop her head during Zoom calls.

“I get up and I live for them. They are my engine of struggle and of life,” she said of the animals that scamper over her looking to be petted, or leap and glide down to the floor.

The 28 are the result of two she adopted several years ago after getting a permit for the exotic animals.

That sort of multiplication is one of several reasons that many animal rights groups oppose keeping gliders as pets, and why some dealers sell only neutered males.

Skeptics say the animals are often abandoned by overwhelmed owners less dedicated than Álvarez — who herself offers advice to would-be owners — or suffer in the hands of people unprepared for the behaviors, special diets and needs of a tree-dwelling night creature that can glide for 50 yards (meters) when free. Some places, including California and New York City, ban them as pets.

Argentine veterinarian Adrian Petta, who specializes in unconventional pets, said he’s seen hundreds of animals over the past 18 months of the pandemic — pigs, rabbits, birds, rodents, geckos and the like.

“Many people have felt alone and have sought pets, or they are tired of the television and computers and need more affective relationships,” he said. Even with those that show no affection, “people can feed them and feel that someone or something needs them.”

That’s the case for Osvaldo Negri, a 50-year-old nurse.

Negri said he began raising spiders to overcome arachnophobia, and now has 60. He said that caring for then has helped him cope with working at the hospital in the midst of COVID-19, “unplugging” as he watches and sometimes touches the spiders, feeding them cockroaches.

“I concentrate on having to move slowly because if they frighten, they could fall” and could die, he said, showing off a colorful and somewhat venomous Mexican tarantula in the palm of his hand.

As with gliders, the choice of pet can be controversial. The red-kneed Brachypelma smithi tarantula he displayed is listed as a “near-threatened” species by the International Union for Conservation of Nature, but the trade in similar arachnoids has helped push 21 other varieties onto its official list of threatened and endangered species.

For Solana Pesca, companionship comes with the bright-eyed rats Regue and Brama, who scratch at their cage when they see her enter the door of her small apartment in Buenos Aires.

“They understand what you feel, they seek you out,” said Solis, who works at an animal laboratory.

South of Buenos Aires, in the town of Tandil, 77-year-old Alberto Castro had spent much of his time at the Hogar San Jose, a home for the elderly, sitting in a chair.

That changed in March last year, just as the pandemic was starting to appear, when the home’s operator, Alejandro Moreno Hueyo, brought in a horse named Coco.

Castro took to caring for the horse, which arrived in bad shape.

“It changed my life. I care for it, it seeks me out and when I approach, it neighs. As long as I am there, nothing is going to happen to it,” he said.