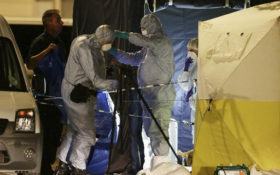 Somali-Norwegian Zakaria Bulhan, 19, pleaded guilty to manslaughter by diminished responsibility in the Aug. 3 slaying of 64-year-old Darlene Horton. He also pleaded guilty to five counts of wounding during a hearing Monday at London’s Central Criminal Court.

Police subdued Bulhan with a stun gun after the late-night attack in Russell Square. The incident raised fears of terrorism, but police said it was not considered a terrorist attack.

Prosecutors said Bulhan was suffering an “acute” episode of paranoid schizophrenia at the time.

Horton had been visiting London with her husband, Florida State University psychology professor Richard Wagner. They were due to fly home the next day.