Socialist magazine melts down, fires staff over... - The Horn News 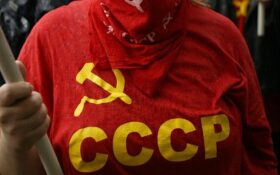 Step one in the socialist playbook is supposed to be organized labor – essentially, workers rights and collective action.

But don’t tell that to the boss of the far-left socialist magazine Current Affairs.

Editor-in-Chief Nathan J. Robinson allegedly just fired much of his staff for having the nerve to attempt to fulfill that part of the mission.

“Yes, we were fired by the editor-in-chief of a socialist magazine for trying to start a worker co-op,” the workers alleged in an open letter, adding that they feel “betrayed” by their one-time employer, which on the surface was supposed to be a microcosm of a socialist collective.

“Everyone’s stated goal, including Nathan’s, was to create a democratic workplace where all voices were equally valued,” the workers wrote in a statement.

Instead, they got hit with harsh business realities of what Robinson described as an inefficient and flailing operation where little got done due to lax oversight.

Still, even he admits that he handled it poorly.

“I screwed up badly and did not live up to my values,” he confessed in a Facebook post.

Robinson is the author of “Why You Should Be A Socialist,” which is supposed to be “a primer on Democratic Socialism for those who are extremely skeptical of it” as well as what socialism “looks like” here in the 21st century.

And what it looks like is a boss who tries to punish workers for forming a labor collective.

Both Robinson and his former staffers appear to agree that the magazine was having organizational problems, leading to an age-old workplace problem: the employees wanted to fix it one way… the boss preferred another, and axed those who weren’t aboard with his plan.

Robinson, however, insists he’s tried to live up to his ideals.

Everyone at the magazine, including him, earned the same salary of $45,000 a year. He also doesn’t enforce strict working conditions or hours.

Partly as a result, the organization developed a kind of messy structurelessness where it wasn’t clear who had power to do what and there was not much accountability for getting work done. The organization had become very inefficient, I wasn’t exercising any oversight, and we were adrift.

That illustrates one of the ugly realities of socialism: When people have no incentive to work harder… with no real conditions on the work itself… and when there’s no real motivation for anything, like no shot at higher pay… people don’t really do much.

As the old Soviet joke went, “they pretend to pay us, so we pretend to work.”

Robinson said he wasn’t really trying to fire them for forming a collective.

But his ex-workers aren’t buying it.

“[H]e is fundamentally missing the point that he has effectively fired us for organizing for better work conditions,” they wrote, adding: “We are sad, aghast, betrayed, and of course, angry to realize that this person we trusted has been lying to us for years.”

According to The Daily Mail, this isn’t Robinson’s only false front.

The newspaper said he moved to Florida at the age of five… but has kept a “phony British accent” that’s “mixed with American inflections.”

In his Facebook post, Robinson said he’s already getting cancellations from subscribers who “rightly feel betrayed” and admitted the magazine may fold as a result.

“I don’t blame people who cancel,” he wrote. “All I can say is that I tried hard for five years to do right by people who worked for us and I’m really sad that I undid it in a single week.”

His ex-workers, however, say there’s another side to the story – and that’s another longtime gripe of workers everywhere: the boss is incompetent.

“Nathan J. Robinson can write articles and give speeches,” they wrote. “But when it comes to running an organization, he simply isn’t up to the task.”