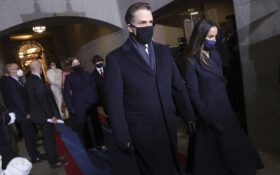 Hunter Biden’s laptop is the gift that keeps on giving.

More proof behind President Joe Biden’s son shady connections and his position with the Ukrainian gas company Burisma has been uncovered in a recent New York Post report.

And the evidence looks bad.

According to the report, it seems as though Hunter — who had been paid more than $1 million dollars a year at the rate of $83,333 a month — had his salary cut in half.

But the timing couldn’t be any more suspicious, according to critics.

Only five months after his father had left the White House.

Critics are saying that’s how half of his paycheck quickly disappeared.

In other words, it seems clear Hunter Biden was being compensated for a large sum of money only when his father was the Vice President. Once former President Donald Trump was elected to office, the cash vanished.

And according to the New York Post, an email on Hunter’s laptop proves it.

A note by Burisma executive Vadym Pozharskyi from March of 2017 read:

“As you will see, the director’s agreement basically remained unchanged.”

“The only thing that was amended is the compensation rate.”

“We are very much interested in working closely together, and the remuneration is still the highest in the company and higher than the standard director’s monthly fees. I am sure you will find it both fair and reasonable.”

New York Post writes that because there seems to be no reason for the pay cut explicitly mentioned, the only change in circumstance would have been the fact that Mr. Biden was no longer in his vice presidential role.

What do you make of this?

Do you think something shady happened with Hunter Biden's salary?