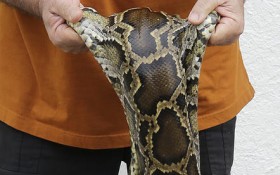 A snake stowed away in a man’s bag and remained undetected until it completed the trip from Florida to Hawaii, officials said.

The southern black racer snake slithered out of the man’s backpack when he arrived on Maui Monday, KGMB-TV reported Wednesday. Snakes have no natural predators in Hawaii and pose a threat to Hawaii’s native species.

The 20-year-old Virginia man was not aware of the animal until it emerged after he arrived at a vacation rental property in the community of Pukalani, the U.S. Department of Agriculture said.

The non-venomous snake measured about a foot (0.3 meters) long and a quarter-inch (0.63 centimeters) in diameter, officials said.

The property owner told the visitor that snakes are illegal in Hawaii and alerted police, who captured the snake along with state Department of Land and Natural Resources personnel.

The man said he did not intentionally bring the racer snake when he traveled from Florida, where the species is common and can grow up to 6 feet (1.8 meters) in length.

The snake is expected to be transferred to Oahu, officials said.

Owning or knowingly transporting illegal pets is a felony in Hawaii punishable by a $200,000 fine and up to three years in prison.

Visitors may not understand “the threat that snakes pose to our community and our unique environment,” said Phyllis Shimabukuro-Geiser, chairperson of the Hawaii Board of Agriculture.

“It is fortunate that the owner of the rental was aware of the seriousness of the snake being transported to Hawaii and took appropriate action and reported it,” Shimabukuro-Geiser said.