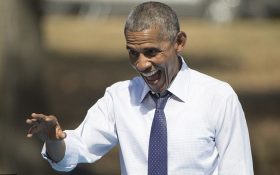 In January, U.S. Attorney General Jeff Sessions announced his intention to form a team of prosecutors to investigate the dirty money circulating among Islamic terrorist groups.

What they’ve found is shocking.

The U.S. government has linked millions of dollars in payouts from former President Barack Obama’s administration to the Islamic terror organization Hezbollah.

That’s according to The Washington Times, which probed deep into the inner workings of Washington, D.C. to find out what happened to the $1.7 billion in ransom money the Obama administration paid Iran during the controversial 2015 nuclear deal.

“According to knowledgeable sources, Iran has used the funds to pay its main proxy, the Lebanon-based terrorist group Hezbollah, along with the Quds Force, Iran’s main foreign intelligence and covert action arm and element of the Islamic Revolutionary Guards Corps,” The Washington Times reported.

“The enormous financial windfall the Iranian regime received because of the deal — access to more than $100 billion, including $1.8 billion in cash — has not been used to better the lives of the Iranian people,” Trump said in a statement on Jan. 12. “Instead, it has served as a slush fund for weapons, terror, and oppression, and to further line the pockets of corrupt regime leaders.”

The recent discovery is part of a larger probe by the Trump administration aimed at dismantling Islamic terror funding networks throughout the Middle East, which critics say were allowed to flourish under Obama.

Senior Trump administration officials said on Feb. 2 that the U.S. estimates Iran sends Hezbollah about $700 million per year, arguing that Hezbollah has become the Iranian government’s primary tool to project its power in the Arabic-speaking world.

Hopefully, it’s not too late.

Should Barack Obama be held accountable for this terror funding?