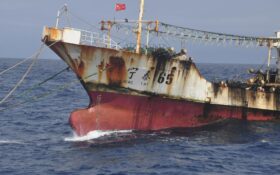 Peruvian fisherman José López proudly remembers his first catch: he was 13 and a local skipper, pitying his ragamuffin look, hired him as an extra hand. When he returned home, his pockets stuffed with a day’s wages, his mother protested.

“She thought I had stolen the money,” López recalls between boisterous greetings to younger comrades who know him simply as “Pépe.” “I had to take to her to the fisherman so she would believe me.”

Since then, fishing has been a way of life for López and dozens of other artisanal fishermen in Pucusana, a port carved from the barren, desert-like hills south of Peru’s capital. For years the fleet thrived, earning López enough to buy a few boats and send his kids to college.

But a decade ago the tuna that he once effortlessly fished started to vanish. So, the fishermen turned their brightly colored boats bearing the names of Roman Catholic icons to squid.

The number of Chinese-flagged vessels lurking just outside Peru’s waters has surged from 54 active vessels in 2009 to 557 in 2020, according to the South Pacific Regional Fisheries Management Organization, or SPRFMO, an inter-governmental group charged with ensuring the sustainable fishing of squid.