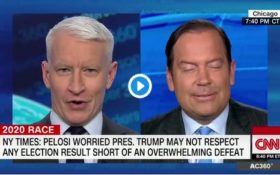 CNN star Anderson Cooper denied accusations he was a part of the American political left while on-air Monday — and then minutes later ripped President Donald Trump for his tweet on the Kentucky Derby.

During a panel discussion, Cooper speculated that Trump would refuse to leave office if he loses the 2020 election, and also accused Trump of being a conspiracy theorist for investigating voter fraud.

“There absolutely was an attempted coup against him,” CNN commentator Steve Cortes replied.

“Here’s part of the paradox,” Cortes said. “You and many on the left are accusing the president of having authoritarian tendencies.”

“Well, first of all, I’m not on the left,” a visibly flustered Cooper said, interrupting Cortes and making facial gestures at his crew off camera.

You can watch the exchange here —

Then, just minutes later after blasting Trump while simultaneously claiming to be unbiased, Cooper went back on the attack again.

Cooper attacked “President Seabiscuit” after his tweet about the Kentucky Derby was “a whole frickin thing.” Cooper said it kept “with his practice of having nothing better to do.”

“The President of the United States seems to have a lot of time on his hands,” Cooper said, moment after claiming to be unbiased. “He can’t even stand some horses getting uninterrupted airtime. He’s got to be a part of every frickin news cycle. He can’t help himself!”