Skip the chocolate, give THESE advent calendars a try - The Horn News 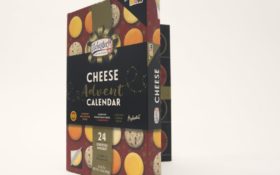 Advent calendars are hitting the bottle.

The cardboard calendars, typically filled with chocolates, are now being stuffed with cans of beer and bottles of wine. Others have chunks of cheese behind each door.

They’re meant to appeal to nostalgic adults who want to count the days till Christmas with something other than sweets. They’re sold for a limited time, get major social media buzz and tend to sell out quickly.

Many are available in the United States for the first time this year after gaining popularity during the past few holiday seasons in Europe. German grocer Aldi, for instance, says it brought its wine advent calendar to its U.S. stores after selling it in the United Kingdom last year. It also introduced a new cheese one.

Dara Collins waited outside an Aldi store before 9 a.m. in early November to buy the advent calendars after she saw them on Twitter. One had 24 mini bottles of prosecco and pinot grigio for $69.99. The cheese one, which cost $12.99, had rectangular-shaped cheddar and havarti. Collins didn’t wait to open them: She drank a bottle of bubbly wine and ate a piece of cheese weeks before Dec. 1.

“I’m Jewish,” says Collins, a former attorney in Hollywood, Florida, who is now a stay-at-home mom. “I just thought it was a really cute gift for myself.”

Adult advent calendars fit into an ongoing trend: people who want products and experiences that “let them embrace their inner child,” says Caleb Bryant, a senior beverage analyst at trend-tracking firm Mintel. “Kids don’t need to have all the fun with advent calendars,” he says.

Ian Hamilton, a radio producer in Manchester, England, bought a cheese advent calendar last year and tweeted that it was “probably the best day of my life.”

“Chocolate was getting a little bit boring,” Hamilton says.

One sour note: unlike the chocolate ones, the cheese advent calendar needs to be chilled, so he had to pull it out of the fridge each time to show it off to guests. He still bought another one this year: “I definitely don’t want to miss out.”

The inventor of the cheese advent calendar is Annem Hobson, who credits herself with creating it back in 2015 when she deconstructed a Cadbury one and replaced the chocolates with Gouda and German smoked cheese. “I’ve always been a fan of savory things,” says Hobson, who lives in London.

The instructions she posted on her blog, SoWrongItsNom.com, went viral and the attention was enough to convince cheese maker Norseland to make the calendars in 2017 for British grocer Asda. This year they’re in more stores and countries, including the U.S., where they’re sold in the specialty cheese section of nearly 250 Target stores.

Another company, Kalea, makes a nearly 2-foot tall calendar with 24 cans of German beer that is sold at Costco and other retailers. Kalea, based in Salzburg, Austria, says it shipped 50,000 beer calendars to the U.S. this year. Next year, it expects to send double that.

“It took off,” says CEO Peter Reimann, who has been selling similar calendars in Europe for a decade.

GiveThemBeer.com, an online alcohol seller in St. Petersburg, Florida, offered beer calendars last year as an alternative to gift baskets. All 500 sold old out quickly, says Kym Toner, the company’s co-founder. So this year, GiveThemBeer.com introduced a wine one. Both have 12 glass bottles instead of 24, because any more would be too expensive to ship, Toner says.

She expected to sell 1,000 of them each, but so many orders came in at the beginning of November that Toner now expects to sell more than 2,000 each.

“Things have gone crazy,” she says. “You would not believe the demand for boozy advent calendars.”