Sisters give birth on same day in Georgia - The Horn News 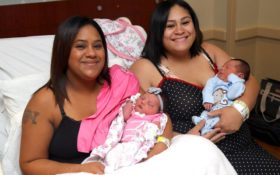 Piedmont Columbus Regional said in a statement that sisters Mara Meighan and Jennifer Solis went into labor on the same day last week and gave birth nearly at the same time at the hospital’s midtown campus in west Georgia. The hospital also says the sisters had their first children around the same time nine years ago.

Meighan gave birth to a girl named Ana Grace, while Solis had a boy named Marco. Ana Grace weighed in at 8 pounds, 3 ounces, and Marco was 7 pounds, 15 ounces.

The hospital says both babies are healthy.

Hospital officials didn’t immediately return a call seeking comment on whether the sisters or doctors did anything to influence when the babies arrived.