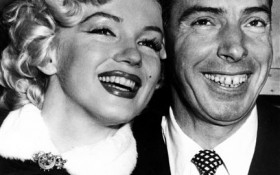 A play that imagines what it might have been like had Marilyn Monroe, Albert Einstein, Joe DiMaggio and Sen. Joe McCarthy met in a hotel room in 1953 will make its New York debut next month — in a hotel room.

The innovative theater company Defibrillator, based in Britain, will present Terry Johnson’s “Insignificance” in a suite at the five-star Langham Place in midtown Manhattan. Previews begin Feb. 19.

“It’s a really exciting way to create theater,” said Defibrillator artistic director James Hillier, who will direct the play in New York. “When it comes to storytelling, you can tell stories in lots and lots of different places.”

The play is the latest in a wave of immersive or site-specific theater in New York, including “Sleep No More,” a mask-filled, genre-bending show that mixes film noir and “Macbeth,” as well as the show “Queen of the Night,” a nightclub-opera-circus at the Paramount Hotel in Times Square.

“The opportunities have opened up now and you don’t have to be in a more formal theatrical environment that’s set up specifically just to do that role,” Hillier said. “I think it just broadens the horizon and shows that theater is a very broad church.”

“Insignificance,” which premiered in 1982 at the Royal Court in London, was made into a 1985 film by director Nicolas Roeg, starring Michael Emil, Theresa Russell, Gary Busey and Tony Curtis. It never had a professional New York premiere.

“He’s got a brilliantly British take on these very American people, which I think offers a humorous, sometimes quite wry take on America and its position at the heights of its power,” said Hillier.

The latest cast of “Insignificance” at the hotel will star Max Baker, Anthony Comis, Susannah Hoffman and Michael Pembroke. Tickets range from $49 to $125.

Audiences — as many as 60 people might be accommodated per showing — will check in at a box office in the lobby on Fifth Avenue and then be taken to the fifth floor and into a spacious hotel room designed to evoke 1953. Nearby will be a room converted into a bar offering drinks and entertainment of the era.