SHOWDOWN! Trump, Biden both head for... - The Horn News 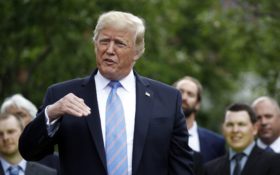 After months of jabbing each other from afar, President Donald Trump and Democrat Joe Biden are heading for a Tuesday showdown in Iowa, a state that’s critical to their political futures.

For Biden, a convincing win in next year’s caucuses would cement him as the Democratic front-runner and reinforce his chief argument that he is the party’s best-positioned candidate to beat Trump.

The Republican president, meanwhile, is seeking to rally his Iowa support as part of a broader effort to ensure the Midwestern states he snagged in 2016 remain in his column next year.

The battle for the Democratic nomination is early and fluid, and Biden has plenty of work ahead to hold his lead among Democrats in Iowa and nationally. But the two men’s convergence in a state that has swung between Democrats and Republicans over the past two decades could offer a glimpse into what a Trump-Biden matchup would look like if the former vice president prevails in his quest for the nomination.

“Both of them being around is a nice contrast for voters so that they can hear two different sides,” said Steve Drahozal, chairman of the Dubuque County Democratic Party.

Trump and Biden have been circling each other for months.

Trump has thrown a steady stream of political challenges at Biden. Since March, Trump has mocked or criticized Biden on Twitter nearly 40 times.

Biden, in turn, has hit at Trump. At a recent Houston fundraiser, Biden vowed not to “get down in the mud wrestling with this fella,” only to say later at the same event, “We all know this guy doesn’t know anything.”

On Tuesday, he’ll criticize the president’s economic policy as hurting those very voters who helped elect him — despite a booming economy.

“He thinks he’s being tough. Well, it’s easy to be tough when someone else is feeling the pain,” Biden says, in remarks prepared for delivery Tuesday in blue collar Ottumwa, the seat of Wapello County.

Trump was the first Republican to carry the economically struggling county in southeast Iowa since Dwight Eisenhower.

“How many sleepless nights do you think Trump has had over what he’s doing to America’s farmers?” Biden asks, according to his prepared remarks. “Zero.”

Trump is expected to highlight his efforts to help farmers hurt financially from Chinese tariffs on U.S. agriculture products.

Trump also is likely to try to sell farmers on the U.S.-Mexico-Canada trade deal, a renegotiated deal that helps American business. Supporters of the deal, which is an update to the North American Free Trade Agreement, feared that Trump’s recent threat to impose tariffs on Mexico over illegal immigration would jeopardize the pact’s passage by U.S. lawmakers.

But Trump announced that Mexico caved on key demands late last week, and he delayed the tariffs for the time being.

For his part, Biden will be in Iowa just days after more than a dozen of his Democratic rivals were in the state for a party dinner. Several aimed veiled barbs at the former vice president, framing him as someone unable to bring the country into the future.

The trip comes after Biden roiled the Democratic contest last week by saying he supported a prohibition on federal funds supporting abortion. After an outcry from women’s groups and most other Democratic candidates, he quickly backtracked and said he would support the repeal of the Hyde Amendment.

He will begin his trip campaigning in parts of southeast Iowa that were won by Barack Obama but that later embraced Trump.

It’s wise for Biden to campaign in Trump-won territory to reinforce his contention that he’s the best-suited Democrat to face Trump, said David Axelrod, a senior strategist to Obama.

“He continues to be the person at this juncture whom voters think can beat Trump. He seems like the least risky choice,” Axelrod said. “But too many episodes like last week and that riskiness factor is going to go up.”