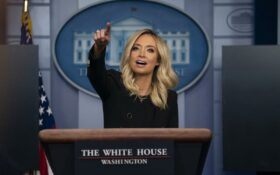 The signing immediately had the political world buzzing.

The rumors grew so loud that Psaki was even asked if she’d be willing to face-off with McEnany.

“Your predecessor, Kayleigh McEnany, has just signed on to Fox News as a contributor,” Psaki was asked at a press conference Tuesday. “If she does have a show, would you be willing to go on?”

“Sure. I’ve done Fox News Sunday twice now,” Psaki replied. “I’m happy to go on a range of shows. I will say that I knew Kayleigh a little bit … I met her when we were both CNN contributors, and we did a few shows together.”

“Like many Americans, we disagree about political issues,” she said. “But we talked about our families, our spouses, sports — all sorts of things in the green room.”

“I certainly wish her the best in her future.”

It was reported in January that McEnany had disclosed to the U.S. Office of Government Ethics while still in office that she would work for Fox News after leaving the White House. The cable news channel said at the time that it had been in discussions with McEnany but had paused them.

While at the White House, McEnany frequently appeared on Fox News programs for interviews.

She said Tuesday that her biggest regret at the White House was not being able to hold a briefing outlining all the accomplishments of the Trump administration.

She said that “everyone in the administration was horrified” by the Jan. 6 Capitol riot, but she insisted that it did not represent the former president’s backers.

Asked if she believed Trump bore any responsibility for the riot, she said, “No, I don’t.”