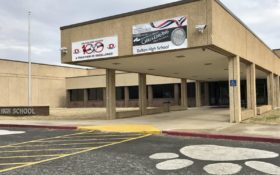 Police officers responded to reports of shots fired inside a Georgia High School on Wednesday and a teacher who was apparently barricaded in a classroom was taken into custody, authorities said.

Police in Dalton tweeted that no children were ever in danger. A student apparently suffered an ankle injury running inside the school as the building was evacuated.

The incident happened two weeks after a Florida school shooting left 17 students and faculty dead, put the country on edge and ignited a new debate over gun control in America.

Dalton police spokesman Bruce Frazier told The Associated Press that the scene at the school was secure. Police did not immediately say what happened inside and did not identify the teacher.

Students were taken to the Northwest Georgia Center and parents advised to go there to pick them up.

The school has about 2,000 students, according to its website. It is located about 90 miles north of Atlanta.

Dalton is known as the Carpet Capital of the World, since much of the carpet for U.S. and world markets is produced within a 25-mile radius of the city. The origins of Dalton’s carpet industry are traced to the making of bedspreads in the community.