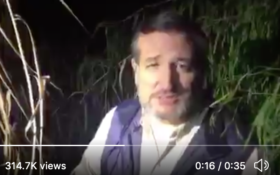 So Republicans are doing the talking for them — and they’re not doing so from their desks in Washington, D.C.  They’ve headed onsite to the U.S.-Mexico border.

Led by Sen. Ted Cruz, R-T.X., a crew of GOP congresspeople made for the border to see the ongoing crisis for themselves.

What they found was shocking.

According to Cruz, they encountered border smugglers, cartel members, and drug traffickers.

“So it’s past midnight,” Cruz whispered, “I’m standing on the shore of the Rio Grande, the waters right behind me. I’m down [at] the border, along with 18 senators. We made the trip to see the crisis that is playing out.”

He went on to detail the conditions currently plaguing the border — including scenes of pregnant mothers nursing their babies on the floor.

Live footage from the banks of the Rio Grande.#BidenBorderCrisis pic.twitter.com/aO4EyANrRQ

“We have been listening to and seeing cartel members, human traffickers right on the other side of the river, waving flashlights yelling and taunting Americans, taunting the Border Patrol because they know under the current policies of the Biden administration they can flood over here,” Cruz said.

“They’re getting paid $4 – 5000 a person to smuggle them into the country and… when they smuggle them in, the Biden administration releases them,” he added.

The congressional lawmakers who joined Cruz for the journey are as follows:

The move by Republicans was timely.

Homeland Security Secretary Alejandro Mayorkas admitted that the border is set to see more illegal immigrants than it had in the last 20 years.

So the crisis is undoubtedly exacerbating and the Biden Administration is doing all it can to divert national attention away from it.

The GOP leaders were happy to go and shine their own lights on the issue.

If Biden and the Democrats won’t do their job, it seems Republicans are happy to do it for them.