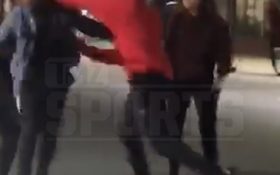 It seems like the scandals surrounding NFL players get worse every day. Just weeks after star running back Kareem Hunt was seen pushing and kicking a woman at a hotel, another shocking video has emerged out of Virginia.

The footage allegedly shows Washington Redskins safety Montae Nicholson delivering a vicious beating to a man during a parking lot brawl. During the video, the victim appears to be punched so hard that he’s knocked unconscious — but the beating continues.

“Nicholson is seen throwing multiple punches at a man outside a car in a parking lot in Virginia. Other men tried to break up the fight, but Nicholson kept at it, throwing haymakers, including one that knocked the victim to the ground and left him looking limp,” The New York Post reported.

TMZ first shared the video Wednesday. Nicholson was arrested and later released on a $2,500 bond.

“We are aware of the arrest of Montae Nicholson. We are gathering more information and will not comment until we have further details,” Redskins spokesman Tony Wyllie said in a statement from the team. The team’s statement was made before the video was shared.

Nicholson, the Redskins’ 2017 fourth-round pick, was with a woman thought to be his girlfriend at the time of the incident. The brawl reportedly started after Richolson’s girlfriend allegedly assaulted another woman with a bottle. She was also arrested, though her alleged assault was not seen in the video.

The Redskins safety is currently in his second year of a four year contract that’s set to pay him over $3 million.

This isn’t the first controversy surrounding an allegedly violent Redskins player this year.

In November the team signed Reuben Foster, a troubled linebacker who has been arrested twice this year. Foster was released by the San Francisco 49ers just days early after he was charged with domestic violence for the second time.

In defending the signing of a reportedly violent abuser, Redskins coach Jay Gruden told reporters that Foster was still a young man that had only “made a mistake or two.”

You can see the shocking video of the Nicholson brawl below.

Warning: This is upsetting to watch.