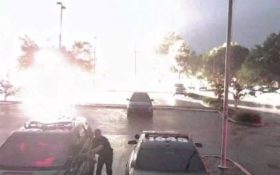 A Florida police officer loading up his vehicle got quite a shock when lightning struck in the parking lot behind him.

Surveillance video released by the Apopka Police Department shows the bolt lighting up the parking lot Tuesday evening. A canine officer seen placing equipment in the backseat of his police SUV appears startled by the flash and hastily gets into the vehicle’s front seat.

In a news release, the police department said the lightning came from a severe storm rolling through downtown Apopka. The lightning strike knocked out power to the police building and damaged multiple electrical transformers.

Firefighters responded due to haze reported in the building, but no damage or injuries were reported. Police said no emergency services were interrupted by the outage.