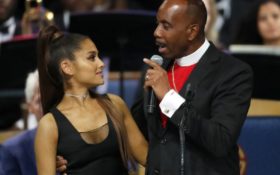 On August 31st, the world came together to say goodbye to the Queen of Soul, Aretha Franklin… but her funeral became a huge controversy after the disgusting behavior of one bishop.

Singer Ariana Grande gave a moving performance during the funeral — and then was joined on stage by Bishop Charles H. Ellis III. The two shared what appeared to be a casual embrace, however eagle-eyed viewers quickly pointed out that the bishop’s hand remained on Grande’s breast throughout their time on stage.

Video of the event went viral very quickly, sparking outrage from fans who called the behavior gross and unacceptable… especially from a man of God.

This bishop apologized to Ariana Grande after people accused him of 'groping' her at Aretha Franklin's funeral pic.twitter.com/yKytZq133m

The bishop who officiated Aretha Franklin’s funeral has apologized to Grande for how he touched her onstage and made a joke about her name.

“It would never be my intention to touch any woman’s breast. … I don’t know I guess I put my arm around her,” Ellis said. “Maybe I crossed the border, maybe I was too friendly or familiar but again, I apologize.”

He said he hugged all the performers during Friday’s eight-hour service.

He added: “The last thing I want to do is to be a distraction to this day. This is all about Aretha Franklin.”

Many people posted close-up images of the moment on Twitter, tagging it #RespectAriana.

Ellis also apologized to Grande, her fans and Hispanic community for making a joke about seeing her name on the program and thinking it was a new item on the Taco Bell menu.

“I personally and sincerely apologize to Ariana and to her fans and to the whole Hispanic community,” Ellis said. “When you’re doing a program for nine hours you try to keep it lively, you try to insert some jokes here and there.”