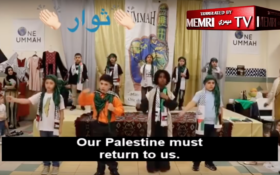 “We Will Sacrifice Ourselves for Al-Aqsa; Will Chop off Their Heads, Subject Them to Eternal Torture.”

One may read those words and expect them to come from a terrorist organization. Perhaps even a foreign dictatorship from a land far away from America.

But the truth is those words came out of the mouths of children right here in the U.S. — and the mainstream media like CNN won’t say a word about it.

What seemed like a harmless video of children in a playful sing-along quickly turned into terror, as video footage surfaced of toddlers dancing and singing to lyrics indicating that they’d sacrifice themselves and kill for Allah.

The children can be seen wearing scarves as they read violent poetry and performing choreographed dance routines to the music.

The Middle East Media Research Institute uploaded and an excerpt of the clip with several stanzas translated. A few of the most twisted:

“Take us, oh ships, until we liberate our lands – until we reach our shores and crush the treacherous ones!”

“Rebels! Rebels! Rebels! Glorious steeds call us and lead us onto paths leading to the Al-Aqsa Mosque. The blood of martyrs protects us. Paradise needs real men!”

“Our martyrs sacrificed their lives without hesitation. They attained Paradise, and the scent of musk emanates from their bodies. They compete with one another to reach Paradise. Will Jerusalem be their capital city, or will it be a hotbed for cowards?”

According to MEMRI, this chilling video is not an isolated event.

“These are not isolated incidents; they are happening in major centers of the country – including in Pennsylvania,” MEMRI said in a statement.

But the mainstream media chooses to ignore it. The Daily Caller found that CNN abused the Covington Catholic kids’ story for more than 20 articles, while this video of adults encouraging children to join radical Islamic terror groups is ignored.

CNN has *not* reported on the kids in Philadelphia who were allegedly singing about chopping people’s heads off. pic.twitter.com/Jdeuz1ImKh

So what’s the deal?

Liberals seek a free pass for any rhetoric related to radical terrorists, all made possible by the likes of Reps. Ilhan Omar, D-M.N., and Rashida Tlaib, D-Mich, who encourage this behavior —

How many more protesters must be shot, rockets must be fired, and little kids must be killed until the endless cycle of violence ends?

The status quo of occupation and humanitarian crisis in Gaza is unsustainable. Only real justice can bring about security and lasting peace.