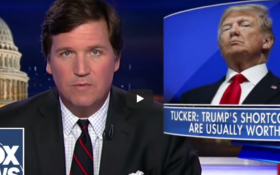 The conservative news host opened the show by praising Trump’s tenure, saying his unorthodox style was “usually worth it.” But Carlson went full blast when discussing the president’s recent comments on gun laws.

Specifically, Carlson was unusually upset with Trump over his reported comments that the administration should consider taking “the guns first” and “go through due process second” when it came to mentally ill people who owned firearms. Carlson called it a “betrayal” of one of the president’s core promises.

“Now, I mean, how honest do you want to be? Imagine if Barack Obama had said that? Just ignore due process and confiscating guns? Obama would have been denounced as a dictator!” Carlson exclaimed.

“We would have denounced him first, trust me,” Carlson continued. “Congress would be talking impeachment. Some would be muttering secession.”

“Those rights are what makes us citizens and not mere subjects of the powerful. The president needs to be reminded of that maybe we all do once in a while,” he said. “If voters wanted that kind of government, they could have voted Democrat.”

You can see Tucker’s segment here —