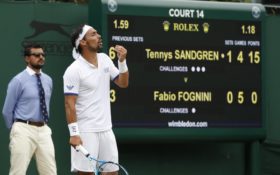 Already on Grand Slam probation, top-10 player Fabio Fognini could be in more trouble after saying during his third-round match at Wimbledon on Saturday that he wanted a bomb to hit the All England Club.

During a three-set loss to Tennys Sandgren at tiny Court 14, the 10th-ranked Fognini referred in Italian to the “damned English” and said he wished “a bomb would explode at the club.”

More than 1,000 bombs fell in the area during World War II, destroying thousands of nearby homes, and 16 fell on the tournament grounds. One hit Centre Court.

At his news conference Saturday, Fognini said his comments came in the heat of the moment. He said he was upset about not playing well and the condition of the court’s grass.

“If I offended anyone, I apologize,” Fognini said in Italian. “That definitely wasn’t my intention.”

The volatile Fognini, who is married to 2015 U.S. Open champion Flavia Pennetta, also bloodied knuckles on his right hand after punching his racket during the match against Sandgren.

An All England Club spokeswoman said there was no immediate comment from tournament officials.

But the episode will be investigated to determine whether it rises to the level of a major offense, because he is still under a two-year probation stemming from when he insulted a female chair umpire at the 2017 U.S. Open and got kicked out of that tournament.

In October 2017, the Grand Slam Board said Fognini would be suspended for two major tournaments if he commits another major offense before the end of this year.

He was docked a then-record $27,500 of his prize money at Wimbledon in 2014 for a series of outbursts during a first-round victory.