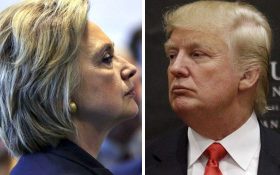 As the live theater capital of the world, New York is known for its edgy plays.

But one recent on-stage experiment at New York University’s Steinhardt School is leaving even the city’s longtime liberal theatergoers shaken to the core and questioning their most basic assumptions.

It even has some diehard Hillary Clinton voters realizing they really liked President Donald Trump all along!

It’s causing a big enough stir to cause experts to pause and study the results — because this short piece of theater completely DESTROYS one of the prime arguments the left makes about Clinton’s stunning November loss.

When they’re not blaming Russia, they claim sexism did Clinton in, and insist that she would’ve won easily if she were a man.

But the play at the Theater Center in Manhattan shows just how false that assumption is – because it flips the genders of the two candidates!

In the play, Clinton is a man named Jonathan Gordon while Trump is a woman named Brenda King. The male Clinton uses her actual words and mannerisms from the debates, while the female Trump does the same.

There are no fancy theater tricks and no dramatic fanciful made-up lines designed to provoke emotions. It’s just the old Folgers Crystals trick… but instead swapping coffees, the candidates are trading bodies.

The experience is so jarring for the left that even the Clinton supporter who helped create the play said it left him “feeling unsettled.”

“When we cross gender but stay authentic to speech pattern, the audience is shaken awake and sees it differently,” co-creator Joe Salvatore told NYU.

They love Trump — and hate Clinton.

Viewers quickly realize that a male Clinton isn’t more appealing. Instead, the flaws they were so willing to overlook — her over-rehearsed lines, the forced mannerisms, and that unsettling smile — become magnified.

Salvatore said that one audience member told him the male Clinton was “punchable.”

Imagine if a Trump supporter had said that about the REAL Clinton!

That wasn’t an unusual reaction, either.

The New York Times spoke to members at a recent showing.

“I was struck by the strength of the technique of the Brenda King character,” a man, who was not named, told the newspaper. “Attack. Consistently attack. Never stop attacking.”

A woman who was watching agreed.

“When she was attacking, I had so much respect for her and her level of confidence,” said was quoted as saying.

Another woman — and avowed Clinton supporter — said the male Clinton was “weak.”

Maria Guadalupe, an associate professor of economics and political science at a French business school INSEAD who came up with the idea for the play, told The Guardian that when Trump’s words come from a woman, “it doesn’t sound as crazy.”

But more importantly, Trump’s words strike home in a way that Clinton’s simple do not.

“Clinton is more cerebral,” she told the newspaper. “Trump goes to the gut. When you catch people in the gut, it’s hard to reason.”

So it looks like Trump didn’t win because he was a man.

Strip away the identity politics, and Trump is simply more likeable.

He won because people had a “gut feeling” about him… and gut feelings, we all know, are usually right.